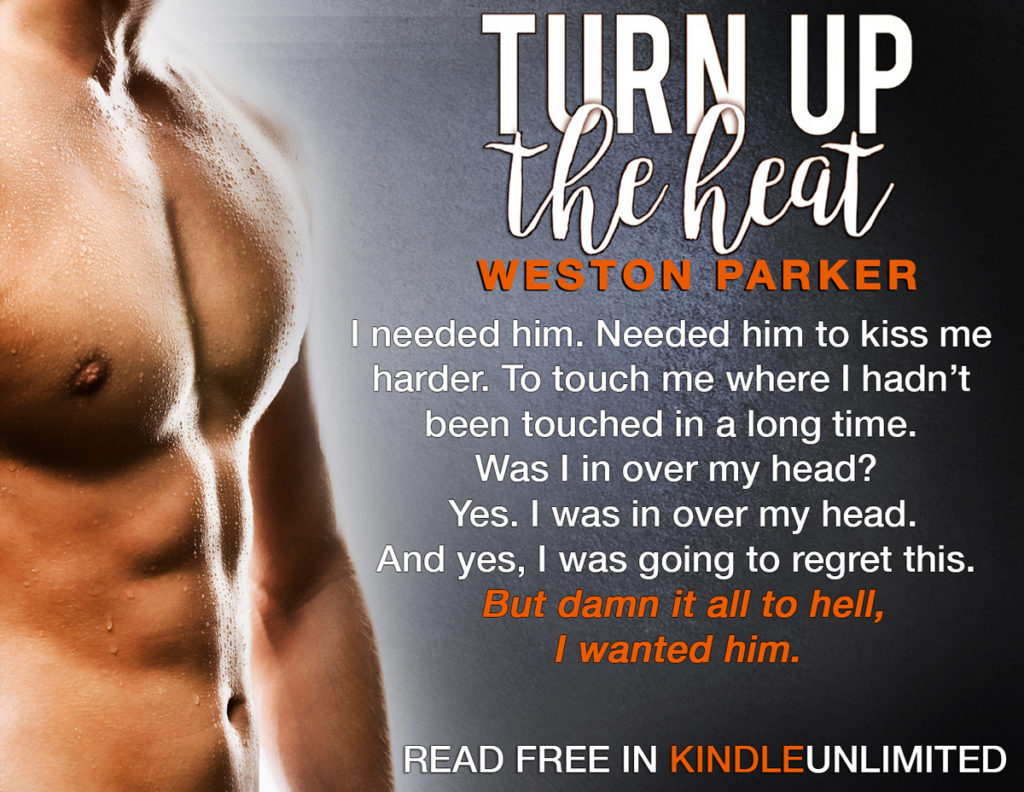 I heard them coming a good five minutes before my crew arrived in the kitchen at the fire station late Friday afternoon.

Their voices carried from the garage and down the hall to the kitchen and living space, where I was comfortably sitting in one of the lounge chairs with my heels kicked up on the coffee table. In my lap was my current read, a science fiction adventure about a young woman who discovered Earth was not her home and had to cope with the knowledge that she would never truly belong.

I dogeared the top right page and closed the book as my crew wandered into the kitchen.

Derek nodded at me in greeting. “Morning, Allen. How long have you been here? I saw that you already did the shift checklist out in the garage.”

It was two o’clock now, and our shift went through until two in the morning. Our internal clocks were set to keep up with the shift work, and we would rotate between days and nights as the weeks went on.

Hayden, presently our only search and rescue guy, strolled in behind Derek. “Why so early?”

“Couldn’t sleep,” I said. They had probably all managed to sleep until noon or so. It was important that we were well rested in order to do our jobs properly with clear minds. Chief Rinehart was always on our case about getting a good night of sleep.

The others filed in after them, Mav Cantone, Trace Gambit, and Maddox Foote, our twenty-one-year-old rookie.

Hayden went to the coffee pot and filled it up with water at the sink. “You didn’t miss much.”

“No, you didn’t,” Derek said before dropping into one of the chairs at the kitchen table and giving me a deadpan look. “They were all giving me shit in there for joining you on the box shift.”

Box was a casual term for the ambulance, which was my forte.

I made an unimpressed sound in the back of my throat. “They will tire of the same jokes eventually.”

Derek frowned. “Have you not paid any attention? They never tire of any jokes. Especially the ones where I’m the target.”

“Or me,” Maddox said, his tone hopeful. For once, he had an ally who was the punchline of all the jokes.

Derek rolled his head to the side to look at Maddox as the young man took the seat beside Derek. “No, Maddox. You and I are not the same. Don’t get any ideas in your head. Hey, I see lint over there. Shouldn’t you be sweeping?”

Derek nodded at the floor. “Yeah. Sure looks like it needs some tending to. Chop chop. You don’t want the chief to walk in here and tell you to do it, do you?”

Maddox’s shoulders slumped, and he hung his head like a heartbroken child on Christmas morning who didn’t get the present he asked Santa for. “Fine.”

Hayden put his back to the counter as the other men all took their seats. I stayed where I was, feet still kicked up on the table with one ankle crossed over the other, and I watched as Maddox pulled the broom out of the closet in the hall and proceeded to push it all around the kitchen floor. He pouted the whole time.

“You missed a spot,” Trace said, pointing under the kitchen table.

Maddox sighed and swung the broom under the table, collecting pieces of dust and crumbs.

This was all standard protocol. Every rookie went through it—well, except me. I’d been spared the torture of being the lowest man on the totem pole. I wasn’t sure how I’d pulled it off. Maybe it had been my complete lack of interest in the whole thing. I hadn’t been bothered in the slightest when the guys on my old crew had tried to haze me. In fact, I hadn’t even really noticed. My time in the military had conditioned me to being in these kinds of environments, and when they didn’t elicit a reaction from me, they threw in the towel and waited for the next young kid to come along.

Now I was the second oldest on the crew. Hayden was the oldest but not the most senior. I’d been working this crew the longest and had done my time in the truck. The ambulance was more my speed these days.

Hayden began pouring coffees. He looked over at me and held up a mug, but I shook my head. No words needed to be exchanged in order for us to communicate.

Soon, everyone was sitting down with their cup of joe, and the quiet chatter grew louder as they got their caffeine kicks. Maddox finished sweeping and put the broom away. As soon as the closet door was closed, Mav clicked his tongue. “You didn’t even sweep around Yellich,” he said.

Maddox gave me an uneasy glance and then looked at the floor around my chair.

I didn’t bother looking. Whether the floors needed sweeping was not my concern. I opened my book and continued reading.

Maddox opened the closet and retrieved the broom. He approached cautiously, wary of me like he always was, and he still maintained a bit of distance as he swept. The bristles of the broom whispered across the linoleum, and I steadfastly ignored him while he bustled around me.

I saw Maddox look imploringly at me for help out of the corner of my eye. I turned the page of my book and continued reading.

“He’d sure look cute in one of those outfits, don’t you think?” Derek chimed in.

The men all chuckled at Maddox’s expense, and he muttered under his breath as he proceeded to push the broom around the living area. Then, right when he was about to ask me to move my legs so he could pass between me and the coffee table, the alarm went off.

I popped to my feet and tossed my book down on the seat before stepping over the coffee table and following the others down the hall toward the garage. Maddox was right behind me and only paused to stuff the broom in the closet as we passed.

When we entered the garage, we scattered.

Derek and I made for the ambulance while the others suited up. I started up the truck as the address came in over the radio, and Derek buckled himself in before shooting me a glance. “You all right, man?”

“You sure? You’re kinda quiet this morning.”

I put the truck in drive as the garage door rolled open, and as soon as I had enough space to fit under it, I stepped on the gas and peeled outside into the sunny morning and hooked a right. It was only a matter of seconds before the fire truck’s sirens whirred to life behind us, and the big red truck rolled out onto the street.

I turned on our siren, too.

It was an apartment fire. First floor. Corner unit. Retired fifty-five plus building. I had a bad feeling forming in my gut. It was like I’d swallowed a cold heavy rock, and it sat in my stomach like dread.

“What?” I bit sharply. This was not the time for chit chat.

We pulled up to the building four and a half minutes after leaving the station. The neighbors in the apartment building were out on the street when I parked the ambulance at the curb. Derek and I wasted no time hopping out and opening the back doors as we waited for the fire truck to pull up behind us.

The neighbors scattered to wait on the other side of the street.

Derek looked out across the lawn at the building. “It looks contained,” he said.

“For the most part. The unit above might be compromised.”

Hayden was already rushing forward. The others, Mav, Trace, and Maddox, were on the hose and closing in behind him to unleash a hard spray of water on the unit as Hayden went through the front doors of the apartment building.

Derek and I pulled the stretcher out of the back of the ambulance. I caught him staring up at the building. His forehead was creased with concern, and his jaw was hard.

“He’ll be fine,” I said, talking about Hayden. I knew it had been hard on Derek to walk away from working Search and Rescue with Hayden to move over onto the box shift with me. He’d wanted it, sure, but that didn’t make it any less difficult to see his friend run into burning buildings without him. The two had been working together for years prior to the change, and he was used to being the guy to have Hayden’s back.

For now, Hayden was on his own until the chief chose Derek’s replacement on Search and Rescue.

Hayden came barrelling out of the front doors of the building. The others closed in after he passed between them, toting an unconscious elderly woman in his arms.

Derek and I had work to do.

We pushed all thoughts of the fire out of our minds as Hayden brought the victim to us, and we got her lying down on our stretcher.

A quick assessment gave me plenty of information. There was soot in her nostrils, and her nose hair was singed. So were her eyebrows. There was dark gray saliva in the corners of her mouth. This was a case of severe smoke inhalation, and I knew with fair certainty that this one wasn’t going to end well.

Derek, however, was not as conditioned as I was. We loaded her into the back of the ambulance and hooked her up to oxygen immediately.

Derek began seeing to her burns, which were primarily located on her forearms, chest, face, and legs. All the areas of exposed skin. I gave her a shot of morphine and hooked her up to the heart monitor.

Her pulse was weak. Almost nonexistent. The slow and unsteady beep echoed in my ears like a dark, wicked memory. My mouth went dry. The smell of her burnt flesh flooded my nose and made my throat tighten.

And then she stopped breathing.

Derek moved up on her other side. “You’d better drive, man.”

The monitor behind me let out a long steady beep when her heart stopped.

My ears were ringing.

When I opened my eyes, the edges of my vision were red. I was staring up at blue skies clouded over with clouds.

No. Not clouds. Dust.

I blinked as my eyes burned and rolled. Pain flared in my side, and I tasted blood. I spat a thick mouthful of it onto the sand beside me and then peered around, across the sand, over the debris of a blown-apart limestone wall.

And then I saw him. Well, not all of him. I saw what was left, a torso, guts spilled across the golden sand, seeping into the earth and not pooling, mouth agape in a cry I never heard, eyes wide, one of them bloodshot.

My ears were still ringing.

“Allen!” Derek grabbed my shoulder and shook me.

I recoiled and lurched away from him, slamming into the side of the ambulance as he braced himself over the patient, hands planted on her chest. He stared over his shoulder at me as he gave her CPR. “Get your ass in the driver’s seat! Move!”

I stumbled to my feet, leapt out the back of the truck, slammed the doors closed, and rushed up the side of the ambulance to swing myself up into the driver’s seat and peel away from the curb, heading for the hospital.

She wasn’t going to make it. Just like my platoon hadn’t made it.