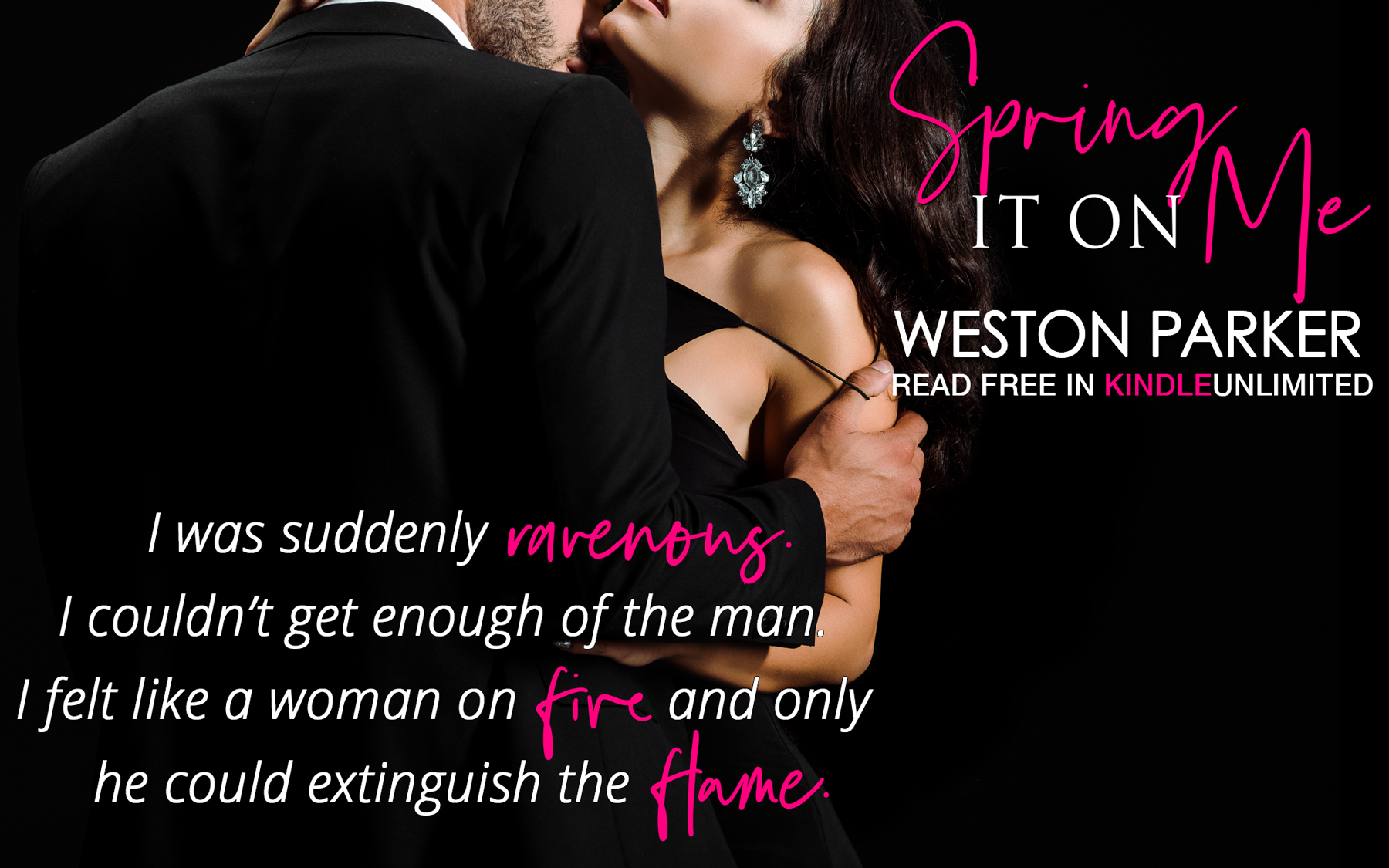 I stared at the two doe-eyed boys sitting across from my desk. I was guessing they were eighteen, twenty at best, barely out of diapers. One of them was moving his mouth, and words were coming out, but I wasn’t paying attention. I had lost interest about four minutes into the conversation. I sized them both up almost immediately and was unimpressed.

They were wearing wrinkled shirts, and one actually had a stain on the collar. Their hair was too long and looked unkempt. They were everything I loathed in the business world. Hell, in any world. They just didn’t give a shit how they looked. I took pride in dressing well. When a person was dressed nicely, even if it was in cheap clothing, it showed they took some effort to present themselves in a decent manner.

The boys across from me had likely rolled out of bed, picked up whatever was lying on the floor, and showed up in my office. They were trying to pitch me a product, which I had actually been interested in until they showed up. I was looking for a partnership with a company that could provide unique, high-quality accessories that would complement the tailored suits my company produced.

If you wanted the best, you had to look the best. It was one of my taglines. These guys hadn’t even tried. It was insulting and irritating. They knew they were coming in to meet with me and they couldn’t be bothered to brush their hair?

I held up a hand, waiting until the noise coming out of Tweedle Dee’s mouth ceased. “Let me stop you right there,” I said. “Have you brought these cufflinks you want me to sell in my shops?”

“Yep, right here,” Tweedle Dee answered, reaching into the pocket of his jacket. Not a suit jacket but some Nike windbreaker thing. He leaned forward and put several cufflinks on my desk. They weren’t in packages or a pretty box. He was just carrying the damn things around like spare change.

I picked up one of the flimsy metal accessories and held it in my hand. “Who produces these?”

“We do,” one of them answered. I didn’t know which and I didn’t care.

“I meant, do you have a manufacturer lined up?”

He shook his head. “No, we make them. Like actually make them.” He sounded proud. I couldn’t understand why. He must have gotten a lot of participation trophies when he was younger.

“You just got through telling me these are quality cufflinks that will complement the suits I sell in my shops. You’re telling me you make these? Do you make them in your mother’s basement?”

“The garage,” Tweedle Dee replied with a cheesy grin on his face. “We’re just like you. Don’t you see?”

“We’re entrepreneurs. We went to school together and were in a business class together. We came up with this idea for cufflinks that are high end, yet fashionable. It was a project we did for class and we got an A. We realized we were sitting on a goldmine.”

I raised an eyebrow, holding up one of the ugliest, cheapest-looking cufflinks I had ever seen. “This is high end?”

“It looks high end,” one of them said with a grin. “We want to give young men with an eye for fashion the appearance of feeling and looking wealthy while being fashionable. We don’t want to sell them too cheap but don’t want them to be too expensive.”

The other one chimed in. “Affordable quality.”

“This isn’t high-end anything,” I said, tossing the cufflink on my desk. “It’s cheap and gold plated, not even a good gold plating. This isn’t going to fool anyone into thinking it’s anything other than a cheap shitty-made accessory.”

“The production cost is low, but we price them high. We’re making some killer profits.”

“You’re already selling these?” I asked, very skeptical and wondering where the fools that were buying them were. I had a bridge or three to sell to these so-called customers.

Dum shrugged. “We sold some to our dad and a couple of his buddies. We’re excited to take an idea and make it big. We’ve read about you and what you did. You have the third most successful tailored suit company in the country. You were once a young guy, just like us.”

My eyebrow arched higher. “I didn’t know I had fallen over the hill.”

“What I mean is, we’re younger versions of you. We got this idea and we’re going to be millionaires one day—just like you. We want to sell men’s accessories that would complement your suits. Cufflinks, tie clips, those little things that go in the front pocket.”

I was sure this was a prank. Fucking Kyle had to be setting me up. There was no way in hell anyone that worked for me would ever let these dumbasses into my office. It was a joke. “The little things that go in the pocket,” I repeated, pushing the cufflinks back across the desk. “Let’s pretend this whole thing is real. Let’s pretend you guys actually want to sell something.”

“But we do want to sell something. That’s why we’re here. We are proposing a, um, a partnership of sorts.”

I smiled. “Of course, you are. Have you ever been in one of my shops? Do you know what I sell?”

“Suits,” Dum quickly answered with a bright smile on his face. He was acting as if he’d won a prize.

“Tailored suits. Suits that men save for months to buy because they are that good. Suits that fit any man, regardless of his height or weight, and make him look good. If I were to put these cufflinks on one of my suits, it would cheapen the look. It would make them look like clowns. Those cufflinks are a joke and a bad one at that.”

They both looked shock.

“What?” one of them asked. “But you have to know we’re trying. I mean, didn’t someone give you a chance when you were first getting started?”

“No. You can go. Take your cufflinks and leave.”

I shook my head, using my menacing looks to drive home my point. “Have a nice day.”

There was some sputtering and grumbling, and then they were on their way out. They bitched the whole way. I picked up the office phone, hit the button for Kyle Dobbins, and waited. “Get in here now,” I snapped and slammed the phone down.

“What the hell was that about?” Kyle asked as he walked into my office.

“Who the fuck set that up? Was that you? Are you trying to get me back for that hooker I sent to your house?”

He grinned. “I’m not sure I’m going to get you back for that necessarily. She wasn’t a hooker. She was a call girl. A very pretty call girl. My mom thought it was funny.”

I couldn’t help but smirk. I enjoyed a good joke as much as the next guy, but I did not think wasting my time was funny. “Who were they?” I asked.

“Those two dipshits that just left my office. Did you hire them to fuck with me?”

He winced, taking a seat. “No, it wasn’t me. What were they trying to peddle?”

“But you know who it was?” I questioned, seeing the look of regret on his face.

“They were two punk kids, hoping to make a quick buck by selling overpriced garbage. They had the audacity to compare themselves to me and ask me to let them sell their shit in my shops. As if I would ever let my name be associated with that crap.”

I was confused. “My secretary?”

He nodded. “The boys are her nephews.”

My jaw clenched as I stared him down. I liked Kyle. In the grand scheme of things, he was probably the only friend I had, and I knew I wasn’t a great friend. I was a dick. I knew it and I couldn’t quite bring myself to care. I kept everyone at arm’s length. Letting people in was dangerous. I had been alone my entire life and had no intention of opening up to anyone—not even Kyle.

“So now I’m running a charity,” I growled and rose from my desk. I walked around and headed for the door.

“Cheryl, pack up your things,” I said, staring at my secretary who was staring up at me with a shocked expression. “I no longer need your services.”

“I don’t understand,” she whispered, tears springing to her eyes.

“Let me explain it to you. I’m not a charity. I don’t mix business with family.” I didn’t have any family, but that wasn’t the point. “You cost me thirty minutes. That was my money you tossed about because you used your position as my secretary to get your nephews into a meeting. You don’t get to decide who I meet with. I do. You tried to pull a fast one. I can’t have people working for me that I don’t trust. Get out.”

I turned and walked back into my office with Kyle right behind me. “Ashton, that was harsh,” he said, closing the door.

I turned to face him. “What’s harsh is a couple of kids getting in here and trying to get me to help them cheat people. I’m not about to put the name I worked very hard to build on a pile of shit. That’s what they offered—shit. She knew they had shit. I’m guessing they’ve been rejected from everywhere else. No one, not even fucking Walmart, would sell that shit, especially not at the price point they are shooting for.”

He let out a long breath. “Let’s grab some lunch.”

“Ashton, I need to talk to you and I’m hungry. You seem a little cranky. I think you could eat as well.”

“I’m asking you to do this one thing. I don’t ask anything of you. I haven’t asked you for anything in three years. This is an easy one.”

He was being dramatic. Kyle wasn’t usually the dramatic type. I tried to remember he was really my only friend. “Fine. I need to tell—”

He smirked. “Yeah, you just fired your secretary. It’s all on you now.”

He chuckled. “I’ll meet you at the door. I need to grab my phone.”

I nodded before going to my desk and transferring my calls straight to voicemail. I probably should have thought a little harder about firing her before I had a replacement. I was pissed and reacted. I hated people using me. I had busted my ass for years to get where I was at. My company was the result of my blood, sweat, and tears. Kyle had helped and owned a small stake in the company, but I was the one who had sacrificed for the better part of my life.

Remembering to be kind to others was not something that came easily to me. I knew most people thought I was an asshole. I was. I had learned the hard way how cruel the world could be. It made me a stronger person. I didn’t believe anyone should be coddled. If I survived, so could the rest of the world.

I grabbed my phone and walked out of my office. Cheryl was sobbing as she tossed things into a box. I didn’t stop to say a word. I walked to the front door and found Kyle flirting with the main receptionist who managed the front of the business.

“Ready, or would you rather have lunch with someone else?” I asked dryly.