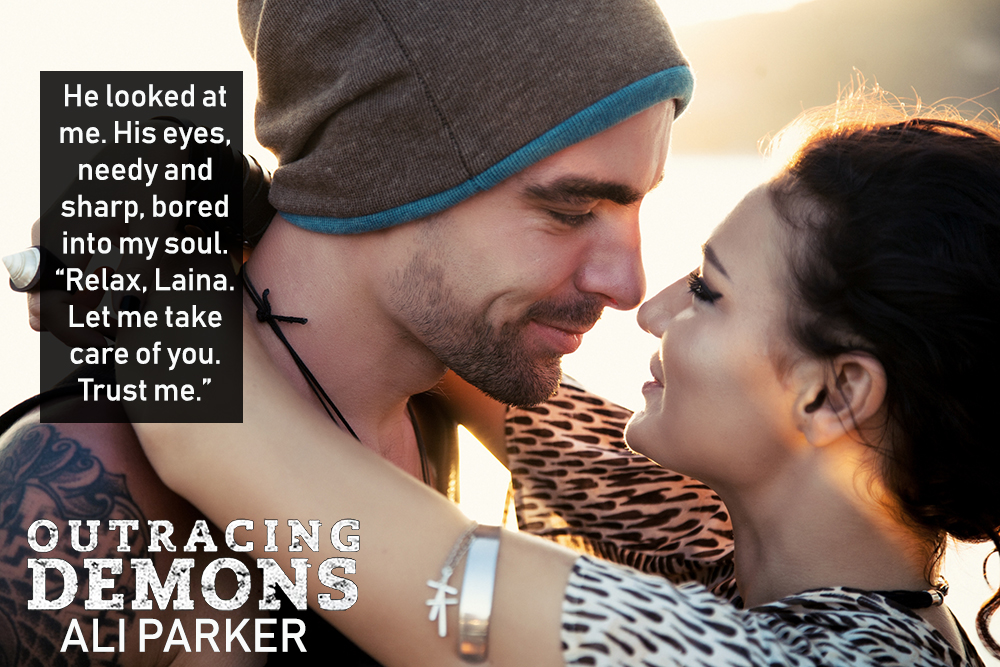 The car was nicer than I’d expected. Way nicer.

My brother Rick had called me that Saturday morning to tell me he’d found something he wanted me to see. After asking him some prying questions and being met with evasive answers, I’d driven over to his house to see what the hell he was going on about.

He had a 1967 Mustang Fastback in his garage. It wasn’t stock. In fact, I doubted anything on the damn thing was stock. It was souped-up, and the metallic green paint glittered in the dim lighting of his garage. Specks of gold and silver shimmered as I walked around the car like it was winking at me. Promising me victory.

“What do you think?” Rick asked as he slid his hands into the pockets of his jeans and rocked back on his heels.

I paused behind the car and looked up at my younger brother. He had come a long way from a head injury six months ago. His blond hair wasn’t quite growing back properly on the right side of his head where a bullet had wedged into his skull. The fact that he was still alive and fully functioning was a miracle, one I was grateful for every day. Rick was the only family I had left, and someone had almost taken him away from me.

Rick’s blue eyes were bright and eager. He hadn’t told me he’d had plans laid down for weeks trying to obtain this car. His hard work seemed to have paid off, and now he had a monster in his garage that would have easily been worth a hundred grand. Give or take.

Rick grinned and did as I asked. His boots thumped on the smooth concrete of the garage floor, and he popped the hood and propped it open. He stepped back as I came around the car to peer down at the intricate work that had been done to the engine.

“Holy shit,” I said and let out a low breath.

“What are your plans for her?”

Rick gave me a smug smile and didn’t say anything.

I narrowed my eyes as suspicion tickled my gut. “Rick. What are you playing at?”

He shrugged one shoulder and let the hood fall closed. He rapped his knuckles gently on the place above the right headlight. “I did some digging. There’s a race tonight down by the docks. Harriott is running it.”

“Who’d you hear that from?”

I nodded knowingly. “How long have you been poking around in that shit?”

“Not long. I just asked her to let me know when the next race came up. This one is big, Mason. The buy-in isn’t bad, and first place guarantees you a spot in the qualifier for The Streets. Not to mention you’d walk away with forty grand.”

I stroked my chin. I had that sort of money kicking around at home. It wouldn’t be hard to pay for the race. The hard part would be going back to a world I thought I was done with—a world that had chewed me up, spat me out, and then stomped all over me for good measure.

“Do you know who any of the other drivers are?” I asked.

Rick shook his head. “No. Harley played it close to the belt, as always. But she said if you were looking to enter, you had a good shot of placing in the top three at least. She wants you to come back, man. Said so herself. And you know Harley. She’s not one to let her bias show.”

“No, she’s not,” I muttered to myself. I walked another lap around the car. The lines were sleek, and the body had been modified only a bit. The green paint danced as I paced around it in a circle and stopped in front of the car again. “So what do I owe you for the car?”

Rick chuckled. “Nothing, man. She’s ours. We store her here, and we both get to drive her when we want. If you win, you can share the prize. Sound fair?”

“Does this mean you’re going to go for it?”

I licked my lips. “Will Denning be there?”

Rick hesitated to answer. He looked from me to the car and then back at me before saying, “There’s no guarantee, but I’d be surprised if he wasn’t.”

Mark Denning had been my undoing six months ago. He was also the one who’d pulled the trigger and buried the bullet in my brother’s skull.

And he’d stolen my wife from me.

I had a score to settle with that fucker. He was mean and dirty, and the law meant nothing to him. He’d gotten away with shooting my brother on the grounds of trespassing. Owen, my buddy Benji, and I had gone to his house to get my wife, Evelyn, back from him when I believed she was being held against her will. Turns out she’d stabbed me in the back and was trading me in for Mark Denning.

“Do you think you’d be ready for that?” Rick asked.

Rick blinked at me. “For facing Mark.”

I couldn’t think of a better way to stick it to Mark than to kick his ass in the biggest annual street race that existed in New York City. It was risky business getting involved with this shit again, but the payoff would be worth it. Vengeance. Cash. The title.

My team had been the front-runners in the underground race scene for years, and I was their leader. We’d never chosen a name for ourselves, but once our presence became known, we were bestowed the title of Street Kings by our fans. It stuck. And I liked the ring of it.

Showing up down at the docks would have repercussions. Everyone would know I was back. Mark Denning, Sid Paul, and Evelyn—people I wished I never had to see again. People I hated for what they had done to me. But I wasn’t a fool. I needed closure, and what better way to achieve that than to beat them at their own game?

Surely Mark and Sid thought they were a shoo-in for victors of The Streets this year. The other competitors might show them a good time, but nobody raced as dirty as the pair of them. They would do anything to win.

Rick clapped his hands together with excitement. “Hell yeah! Glad I didn’t splurge on this green beast for nothing.”

He shook his head. “Nope. I already qualified for The Streets and have a starting spot at the first race next weekend. I got in for free.” He winked.

“I made a deal with Harley.”

He laughed. “If I could get you to come back, she’d get me in for free.”

I rolled my eyes. “Of course. I should have known the two of you would be conspiring together on this one.”

“Besides, why would I want to fork out my money when I know you’ll kick my ass out there? I’m gunning for second or third. First is yours.”

I smirked. “At least you know your place.”

“Yeah, fuck you, too, Mason. You smug bastard.”

I laughed and so did he, and then he went to the mini fridge in the corner of his garage and grabbed two beers. He tossed me a can, and I popped the tab and drank. “So what time do we have to be there tonight?”

“Race starts at midnight, but you have to be there by ten to register. You’ve been out of the game for a while, so Harley will need some extra time with you.”

Midnight. It seemed so far away. My stomach was already tight with nerves at the idea of being back in that world.

I missed the cars. I missed the roar of the engines and the smell of gas thick and heavy in the air. I missed the wet pavement, the burning tires, the elated screams of excitement as I passed the finish line.

I missed all of it and none of it all at once.

Evelyn had ruined me. She and I had done the whole race thing together. We’d met on the track, and she had me wrapped around her little finger within hours. She was unlike any woman I’d ever met, and I followed her around like a lost puppy dog, desperate to know anything and everything about her. She was a veterinarian. Her passion for animals and people was what drew me to her. She was warm and friendly and sweet, and when I discovered she knew her way around an engine, I was in love.

We dated for fourteen months before I proposed. She said yes, of course.

Our wedding was a small affair. Neither of us had much family left, so we got married at our house in the backyard in the middle of summer. She wore a white sundress that went down to the ground. I remember she had grass stains all on the hem of it by the end of the night. She didn’t care. She told me it would be wrinkled after we fucked in it anyway.

She was my girl. My everything.

And then, all of a sudden after a year of marriage, she wasn’t.

I was under no delusion that we were the perfect couple. We had our fair share of fights, and both of us were as stubborn as mules. It made for some epic shouting matches. She laid hands on me in fits of rage, and when I was forced to make her stop hitting me by holding her wrists, she’d get so turned on, we’d be fucking wherever the fight started. Kitchen. Living room. Backyard. It didn’t matter. The passion was insane.

I’d been foolish to believe it would be enough.

I remembered the day I went to Mark Denning’s house after thinking he’d kidnapped my wife. My rage had been uncontrollable. Benji and Rick were with me for backup. I’d had no idea how bad things were going to get. All I could think about was reaching my girl. Saving her. Sparing her from that monster.

When we arrived and the door opened and I found her standing there of her own free will, smiling at me in a way that made my insides squirm, everything fell apart. She told me she was through with me. Then she pointed a gun at my chest.

Thinking about how it all went down still made my head spin.

I looked up at my brother. He was leaning against his workbench on the far side of the garage. His beer was in one hand as he braced himself against the bench with the other.

“Do you think Evelyn will be there?”

Clearly, he’d been lost in thought over the same things. That day had been hellish for him too. He’d nearly died after all.

I sighed and drained the rest of my beer. “Who fucking knows?”

I looked him in the eye. “Not a damn fucking thing. I’m going to win. That will be enough.”