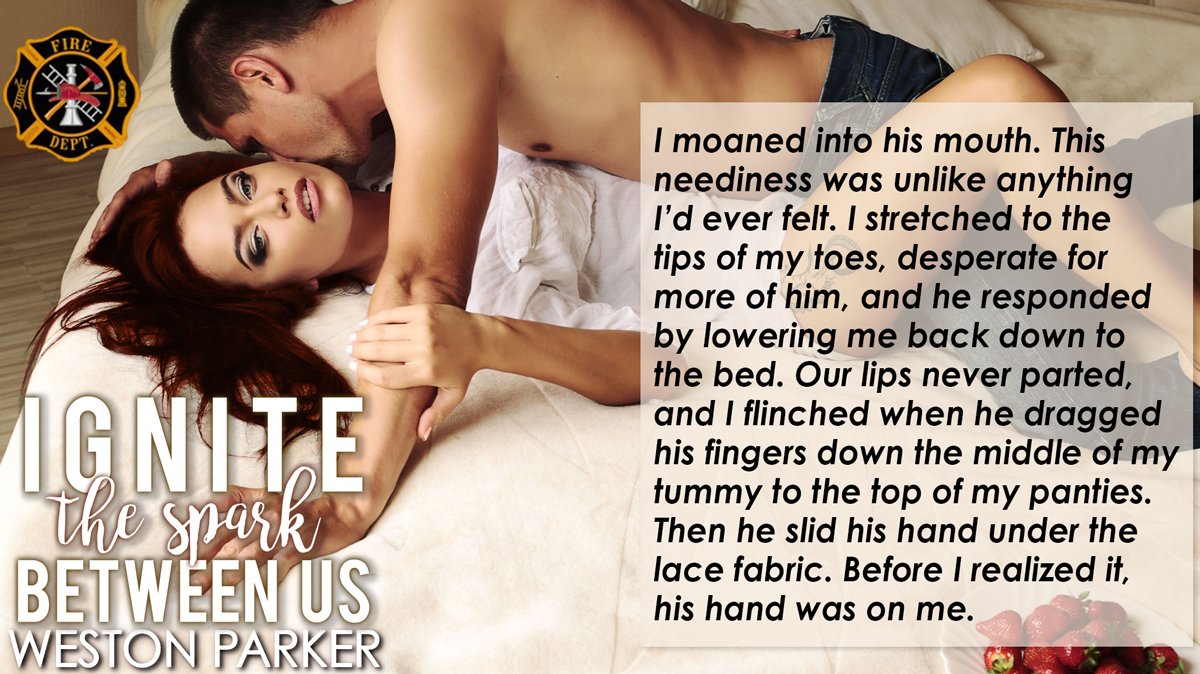 The afternoon humidity made my skin sticky. My black fireman’s uniform clung to my body like a layer of half-shed skin, damp around the collar, lower back, and shoulders. I pinched the front of the T-shirt between my thumb and forefinger and tugged rapidly, creating some airflow between my torso and the fabric in an attempt to cool down.

I shifted around in my chair and squinted up at the sun. It was just past noon.

It had been a quiet morning at the firehouse. We hadn’t had any calls in the last five or six days, and the guys and I had settled into a routine of recreation. As I sat in the little sliver of shade with the back of my chair pressed up against the brick wall of the back of the firehouse, the rest of my crew indulged in a friendly game of half-court basketball before me.

How they could enjoy playing in this heat, I had no idea.

But they were definitely enjoying themselves. The heat radiating off the black pavement didn’t seem to bother them in the slightest. They dripped with perspiration and left little raindrop-sized drops of moisture on the pavement at their feet.

Trace and I were the only ones not playing. He was somewhere in the garage, tending to one of the trucks, and I was reading.

Derek, Allen, Hayden, and Maddox were the ones on the court. Hayden had the ball and was hanging back on the centerline, bouncing the ball between his feet as he passed it from his left hand to his right, all the while wearing a cocky smirk and eyeing his teammate, Allen.

Derek and Maddox made their best effort to block Allen and take the ball from Hayden.

The court erupted in a flurry of movement. I remained motionless, watching from beneath my eyebrows as my face was still tilted down to the page of my book. Hayden broke free of his blocker, Derek, spun to the corner of the court, and threw a perfect shot.

“Nothing but net.” Hayden grinned.

Allen gave him a high five before they all rearranged themselves back into starting positions. Maddox took the ball. The four of them held their positions, waiting for him to make his move.

When he did, things unfurled just as quickly as the last time.

The only difference was Maddox never made it to the net. He lost the ball to Allen, who slapped it away from him, and the ball rolled and bounced out of bounds to stop at my right foot.

“Throw it here, Mav,” Allen said, holding his hands up and splaying his fingers.

I returned my attention to the page of my book and nudged the ball to him with the toe of my boot.

Allen bent and scooped it up. “You sure you don’t want to play, Mav? We can work around an uneven number.”

“You can read anytime,” Hayden chimed in, planting his fists on his hips. His hair was matted to his forehead with sweat, and beads of it dripped from the end of his nose.

I shook my head. “It’s too hot. The shade is nice. Besides, I’m not much of a basketball fan.”

“Good thing we’re not playing a real game then.” Hayden shrugged like that would make me like the game better, simply because they were playing a half-court game.

I’d never been a fan of basketball. In high school, I played a bit, but I always leaned more toward football or rugby. Impact sports. Basketball just didn’t do it for me.

The guys lost interest in me after that. They went back to their game, and I was left in peace to go back to my book. It was pleasant to sit outside, despite the heat. The hammering of the basketball striking the pavement and the chatter of my crew’s voices as they taunted each other in a friendly competition made for good background noise as my eyes scanned the page.

I was lost in my fictional world when the door to my right swung open. Trace scanned the court, and then his light blue eyes flicked to me. “You busy, Mav?”

“I could use an extra set of hands in the shop. Just for fifteen minutes.” Trace tipped his head toward the door.

I pushed myself up, not enjoying the way my shirt stuck to my skin like the layers of paper-mache I’d helped my daughter apply over a blown-up balloon for a school project the week before. “Right behind you.”

The sounds of the others playing basketball became muted behind me as I followed Trace inside. We made our way down the back hall to the kitchen and sitting room, and then again down the corridor that led past the chief’s office, the dressing room, washrooms, and let out into the garage.

Trace stopped at an unraveled hose and gathered one end into a loop to drape it over his shoulder. “There’s a second over there. I was doing inspections all morning, and I have to get this shit done.”

I bent over and grabbed the second hose. I followed his actions, draping it over my shoulder and proceeding to use my opposite hand to gather it in equally sized loops, adding each one to my shoulder. Every loop added more weight. When we were done, we put them back on Gerty, one of the fire trucks.

“Anything else?” I asked.

Trace shook his head. “Nah. Honestly, I just thought you might want to step in and get out of the heat for a minute.”

I ran a hand over my head. My hair was trimmed short, almost buzzed, like most of the other guys, but there was sweat up there nonetheless. “It’s a hot one. That’s for sure.”

“How are you going to beat the heat this week?” Trace asked, leaning back against Gerty and crossing his arms over his chest.

“It’s not much of a priority. Olivette starts kindergarten next week. So I’m a little out of my depth trying to get her ready for school.” I chuckled and shook my head at my own naivety where school was concerned. “I can’t believe how many supplies they need. I mean, it’s kindergarten, not the military.”

Trace cracked a smile. “Kindergarten is serious business. And a big step. You ready for it?”

Was I ready for my baby girl to start her first day of school?

Was I ready to leave her in a room full of strangers?

Was I going to do it anyway?

Yes. Because that was part of fatherhood, and school was a necessary life step.

“Not really,” I admitted. “But Olivette is ready. She’s been talking my ear off about it for weeks.”

“Olivette talking too much?” Trace’s grin stretched. “No way.”

My daughter had a reputation for being a chatterbox. I would have defended her had it not been so true.

But there was no one else in the world I enjoyed listening to more than my little girl.

Trace put a hand on my shoulder. “She’s a smart kid. She’ll make friends faster than Maddox can put his own foot in his mouth. It’ll be smooth sailing from there.”

His hand fell from my shoulder. “Glad I knew the right thing to say. You know how fucking clueless I am when it comes to kids. Little hellions. Not your Olivette, of course. Just all the other ones. Energy-sucking, greedy, little—”

Trace’s voice was drowned by the blare of the fire alarm.

Trace and I were halfway into our suits when the others from the crew burst into the garage. They were gross and sweaty, but the playfulness that had been on the court was gone. They were in full action mode now as I opened the bay doors and swung myself up into Gerty’s passenger seat.

Trace got behind the wheel.

The others piled into the back, and we were pulling out onto the street in less than a minute and a half after the alarm going off. The address came in through our radio, and so did details about the fire.

It was contained to the bottom corner unit apartment in a seniors’ building downtown. The dispatcher didn’t have any information on how the fire started, and it was reported by a neighbor who smelled smoke shortly before the building alarms went off. As far as we knew, everyone had evacuated the building and there was nobody inside.

When we pulled up, I estimated that the fire had doubled in size since the call. Thick black smoke billowed out of a shattered window on the side of the building, where I assumed the kitchen was. Through the sliding glass patio doors, all I could see was the glowing flicker of amber flames struggling for oxygen in the cramped apartment. The smoke was heavy and thick.

The fire wasn’t a raging one, but if it ate through the ceiling and found more kindling or air, we’d have our hands full.

I swung down out of the truck. We had to move quickly.

Trace went to the hose. We uncoiled and rushed forward as Maddox and Derek hooked it up to the fire hydrant at our backs. As soon as we were good to go, we let loose, dousing the outside of the building with water to stop the spread of flames.

The others got a second hose going, and I pointed around the side of the building for them to shoot their spray through the blown-open kitchen window. We’d work one hose from the outside to keep everything wet and stop the fire from growing while the other team put it out from the inside.

We had a crowd of onlookers gathering on the other side of the street.

This sort of thing was common in Searing and every other municipality, in fact. People were drawn to chaos like moths to flames, and there was something about fires that made them flock together like herd animals.

Why did people want to gather around and watch someone’s home burn? Why did they want to stand by, helpless, while someone lost everything?

The flames inside the apartment were dying. The smoke still swirled upward, staining the outside lining of the building black, but it was abating. Slowly.

We needed to speed it up. The sooner we removed the heat, the safer the other floors would be. There was no telling how damaged the ceiling was or if there was a chance of a second electrical fire starting. We needed another access point to get the water inside.

I moved closer and pointed the hose directly at the sliding glass doors. Trace called out behind me that we were wasting water, shooting glass. I moved closer, still maintaining a safe distance. I could feel the heat radiating off the building.

Then, just as I’d hoped, the glass doors shattered. The heat inside coupled with the cold water from the hose had been enough, and just like that, we had a bigger access point from outside to shoot our hose directly into the apartment.

The fire was out in less than two minutes.

When we were finished at the site and all the equipment was back on the truck, Trace approached. He was sweaty, as we all were, and he held his headgear under his right arm. “Good thinking out there, man,” he said. “The chief will be impressed.”

“I just didn’t want to risk it spreading.”