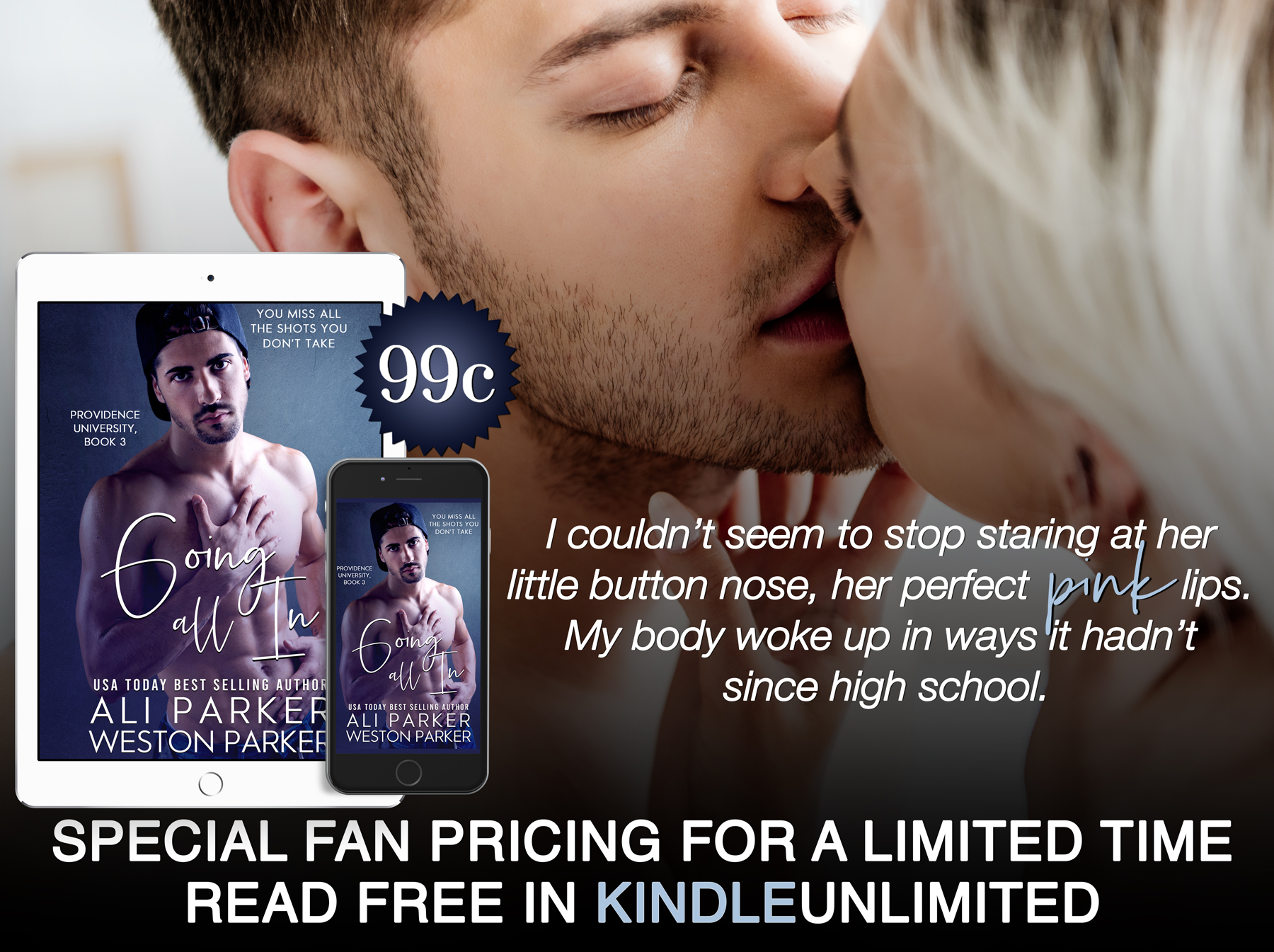 “Up next, we have Providence University junior, Miss Emily Campbell,” the announcer’s voice blared over the speakers far above our heads as we sat in the gym all huddled together.

“Come on, Em. You got this.” I sat up tall and scanned the far side of the room, looking for Jacob Wright, my best friend and president of our fraternity at Providence. He and Emily had finally given in and started something that looked like lustful dating. I could only hope that he didn’t fuck things up. I’d hate to have to move from being a good guy to beating his ass endlessly over her. She was like a sister to me. She reminded me too much of Lyndsay, my own sister, not to be.

“Move over.” Jacob bounded up the stairs and dropped down next to me, the smile on his face causing one to lift my lips as well. He was in love. Whether the bastard knew it or not, Emily had him headed toward something long term and lasting. The biggest man-whore at Providence University had met his match. It was almost comical.

“Oh God, I hope this goes well.” Natasha Kelly leaned forward and pressed her hands to her face as she sat on the other side of Jacob. “I can’t look.”

“Come on, Tasha. You know Em has this. Coach Rhodes has been prepping her to be head cheerleader since she got to Providence.” Jacob leaned toward Tasha, pressing his shoulder against her and smiling.

I wanted to respond, but I couldn’t seem to form a single coherent sentence around the girl. Between her short white-blonde hair, petite frame, and beautiful face, I was lost. Like far more lost than I’d ever been over a girl before.

I was grateful for the ability to keep a facade in place at all times like my father had done my whole life. I’d seen the man smile twice—maybe. Where I was a little more relaxed than that, I still had the gift of appearing cool and collected when I wasn’t anything near it.

Emily bounded across the room in the longest flip-flop I’d ever seen. She ended with a back flip, and the stands went wild.

“That’s my girl.” Jacob cupped his hands around his mouth and yelled as a collective giggle rose up from the stands.

Emily’s cheeks turned pink as she moved right into a cheer routine.

I crossed my arms over my chest and watched her, expecting her to kill it. We’d been friends since my freshman year, and the bond had only grown over time. She and Jacob were on the short list of people I would try and keep up with once they graduated. I had one more year after everyone left, but it would go fast, or so I hoped.

Of course, the pretty girl sitting on Jacob’s left was at the top of the list as well. Seeing that we hadn’t spoken more than fifteen words to each other over the last few years, I figured my chances of getting to know her were slim. It was a good thing Emily was trying to set us up. She was the only one that might be capable of talking Natasha out of her shell. I wanted to better understand why the beautiful girl kept to herself in the first place. She had a story to tell and damn if I didn’t want to be front and center when she told it.

“Yes!” Jacob jumped to his feet as the crowd stood up and exploded in accolades for Em. I got up and clapped loudly before whistling through my fingers for her. A louder whistle resounded to my left, and I glanced over to find Tasha smiling over at me.

“Show off,” I mumbled and winked at her before turning back toward Emily.

We sat down, and a few moments later, they announced that Emily would be head cheerleader for our senior season. The place erupted again, and I moved down off the stands and stood near the back of the room as everyone crowded in. I couldn’t have been happier for her or Jacob, but I sure as hell wished I had someone beside me to enjoy the moment with.

“You going to the foam party tonight?” Natasha’s voice was hard, tough, much like her.

I glanced around to find her standing just behind me with her arms crossed over her chest. The look on her face said she could care less if I was going and was just trying to be nice and make conversation.

“Yeah. I figured I would go slide around the floor a little. It’ll give Jacob something to give me hell about later. He needs new subject matter anyway.” I gave her a cheeky grin and turned back to Emily and Jacob.

“I’m surprised she let him talk her into anything.” She moved up beside me and the smell of her shampoo rolled through my senses. I tried hard not to breathe in and make it obvious that I was into her.

“He’s a whore, but I guess everyone deserves a chance. At least one.” She shrugged and walked past me to move up into the crowd.

“That include me?” I slipped my hands into my jean pockets and turned to walk out into the late afternoon. The party would be fun later that night, and hopefully, Emily wouldn’t let her unsocial roommate get away with not coming.

I was looking far too forward to seeing her again.

“You did what?” I glanced over at Jacob as we rode back up to the Jolly Fox together later that night. Emily was out celebrating with Aubrey Moore and some of her other friends, from what Jacob said, so us guys were on our own.

“I paid for her cheerleading stuff for the next year.” He shrugged and ran his fingers through his dark brown hair. The five o’clock shadow dusting his face left him looking more like twenty-eight than twenty-two, but it was probably a good thing. He was in charge of the rowdiest fraternity house on campus. How I ended up at Omega was still a mystery, but I helped to maintain order and balance, so it worked.

“It’s covered. Coach gave me a scholarship to get through it.” He shook his head. “It’s crazy how you set out to help someone you care about and the fucking universe gives you that shit back.”

I rolled my eyes. “I’m not sure how to respond to that.”

“Then don’t.” He pulled into the parking lot of the club just off campus and turned off the engine. “You gonna let your balls drop tonight?”

“Meaning?” I unbuckled and got out of his truck.

“Meaning that you need to man up and ask Natasha out. I saw the way she was hanging around you earlier today. Don’t play coy. That shit isn’t fitting, bro, and you know it.”

“True.” I rolled my shoulders and walked to the door. “If she’s here, I’ll see if she’s up for grabbing a movie sometime.”

“You want me to set you guys up? You know you’re shy. You’ll never ask her to a movie. Don’t play that shit.” He snorted and patted my chest before walking into the loudness of the club.

“Fuck you too.” I walked in behind him and stopped short as the foam machine across the room blew white foam onto the dance floor. It seemed like the whole damn school was already there, laughing and trying to keep their balance in the middle of the madness.

“Jacob! Micah! Over here, guys.” Jayce Moore waved us over and lifted a beer as we reached them. His twin sister Aubrey, her bestie Layla, and Emily sat at a table together with several snacks and two pitchers of beer between them.

“Hey, guys. All that’s missing is the big man, huh?” Jacob glanced over at Aubrey, who let out a sad sigh and finished her beer in two long gulps.

“Nice, jackass.” Layla gave Jacob a crooked smile as he moved in next to Emily and reached over to snag Layla’s beer.

“What? I meant it in a good way. We all miss Lucas. When is he coming back for another visit?”

Aubrey shrugged. “I’m not sure.”

“You joining us?” Jayce gave me a smile and scooted over, making room for me.

“I will in a minute.” I turned and let my eyes scan the room.

I turned to face her and chuckled. “How do you know I’m looking for someone?”

“Aren’t you?” She moved to the top of Jacob, swatting at him as he fondled her in front of all of us. “Monster.”

“All yours, baby. Keep me locked up?” He chuckled, as did the rest of the table.

“No, I’m not. I just wanted to see if any of the basketball guys were here. It seemed like the whole damn school was there today.” I reached out and brushed her hair behind her ear. “You did great. I’m super proud of you.”

She moved into my arms, and I stiffened for a minute at the fear that Jacob might think something was up with us. He knew that Em had a special place in my heart, but jealous alpha-male bastards were a dime a dozen, and my best friend was no exception to the rule.

“Thanks for your support and for being cool with me and Jacob.” She moved back but kept her lithe arms around my waist.

“Of course. You’ll have to tame him a little, but something tells me that you started doing that a long time ago and none of us noticed.”

She smiled. “Yeah. There’s a story behind all of this.”

“There always is.” I removed her arms from around me and ran my hands down her arms. “How’s your mom and your little sister doing?”

“Good. Mom’s going into rehab and Cally will be staying with my aunt for a while. I’m going to try and get more involved in her life just so she has some type of stable relationship besides my aunt.” She glanced down toward her feet as her long brown hair cascaded over her shoulders. She was breathtaking, and yet the only emotion I could find inside of me where she was concerned was the need to protect her like I would have protected my sister Lyndsay.

“That’s great news. You know I’ll go out there with you anytime, right?”

“Of course.” She glanced up. “You know, Tasha asked about you this afternoon.”

“What about me?” I crossed one arm around my waist and brushed my fingers against my lips with my other hand, trying to act much cooler than I felt.

“She was asking about your degree plan and if the NBA was a stretch goal for you. Just stuff about your future.”

“What did you tell her?” I lifted my eyebrow, interested in hearing what Em thought she knew about me. Our relationship consisted of her talking and me listening, which was fine by me. I wasn’t sure what she knew or thought she did, but it wasn’t much.

“To ask you herself.” She winked before turning back to the table and crawling into Jacob’s arms.

“I’ll be back. I’m going to the restroom.” I waved at the group and turned to walk to the restroom. I stepped onto the floor and tried to avoid the foam, but with the people bouncing all around me, I lost my balance.

“Fuck,” I grumbled as my feet slipped out from beneath me and I launched backward. Pain radiated through my wrist as I smacked it on a chair nearby, but it died as I hit the floor beneath me. My head slammed into the hard marble and the world went dim.

I blinked a few times and lifted my good hand, mumbling that I was fine before I passed out.