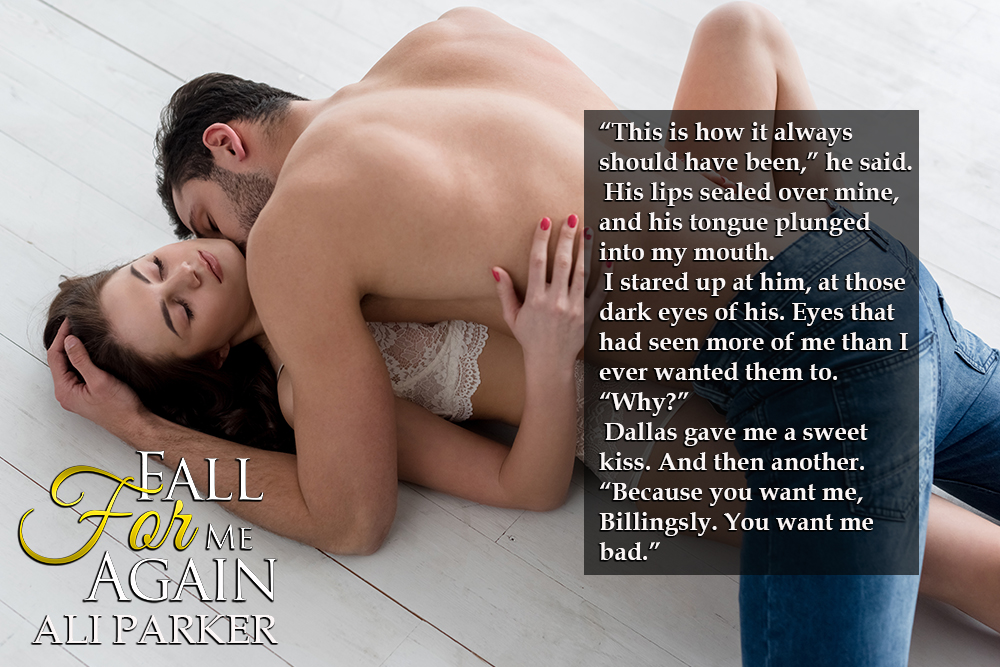 I’d been staring at my computer screen for too long. The letters of the email I drafted were all beginning to merge together, creating fuzzy little shapes that made my eyes feel like they were melting out of my brain.

With a groan, I reached out and jabbed the button on the bottom of the computer monitor. The screen went black, and I pushed my chair back from my desk to run both hands over my face and rub at my eyes.

It had been a long day.

Treo Publishing had expanded over the last sixth months, and as their PR guy, I was suddenly overwhelmed with much more work than I was used to. I was drowning in a melting pot of new writers, doing everything I could to get their work noticed.

Naturally, all my hard work had paid off because nobody was better at this job than me. That was why Treo paid me so well and why I had one of the biggest offices in the joint.

I glanced at my watch and winced at the realization that I still had another hour left to go before I could head home for the night. I wasn’t too interested in looking at the computer screen anymore, so I went to the pile of manuscripts neatly stacked on the top right corner of my desk and grabbed the first one.

It was a new book the company had picked up from a first-time writer who I had been assigned to. Once I read his book, I’d work on setting up a marketing campaign with him, where we would schedule press releases, book signings, tours, and if we were lucky, a few interviews with some big names to really get his work out there.

I hadn’t even read through the first page when a knock on my door interrupted me. I called for them to come in.

My door opened, and Chance Becker, Treo’s Human Resources director, poked his head into my office. He flashed me a devilish smile, waggled his eyebrows, and asked, “You busy, Dallas?”

I put the manuscript back on top of the pile, leaned back in my seat, and kicked my feet up on the desk. “Never too busy for you, Chance. Come on in.”

Chance closed the door behind him and sat across from me. He looked oversized in the chair, which seemed to disappear beneath him. His tan-colored suit was at odds with the gray wall behind him, lined in bookshelves full of novels from authors I’d worked with.

He undid the buttons of his suit jacket, cast it open, and glanced at the stack of manuscripts on my desk. “Are you falling behind?”

I shook my head. “Nope. This is my new normal.”

“Jesus. They need to hire another one of you if they want to keep up with their publishing and event dates.”

I shrugged. “I’m fine with being their only PR guy for now. More money for me. Better deals for the writers.”

Chance stroked his smooth chin. “Fresh blood can be a good thing. Keeps it interesting. And if you’re lucky, you’ll find yourself working alongside someone who’s easy on the eyes.”

I arched an eyebrow at him. “Chance. You know you’re the HR Director, right?”

Chance chuckled and let his hand fall from his chin. “Of course I do. But you’re safe territory for me to speak openly with. I lucked out, man. Really lucked out. I got myself an assistant.”

“Congratulations?” I asked, rather than stated. I wouldn’t want an assistant. In my eyes, they were more trouble than they were worth. I was perfectly competent at fulfilling the duties of my job on my own. Having an assistant meant I had someone I needed to delegate to. I wasn’t interested in that. Not even a little bit.

Chance leaned back and clasped his hands behind his head, lacing his thick fingers together. He gave me a cocky, crooked smile, and at this angle, his second chin emerged. “Congratulations is right. She’s a real looker, Dallas. I’m telling you. When you see her, you’ll know what I’m talking about. An ass to write home about.”

“Why did you pursue a career in Human Resources, Chance? You’d be better suited for, I don’t know, literally anything else.”

“Like you’re not a player yourself? Don’t pull the high and mighty card with me, Dallas. I know what sort of guy you are when you’re not in this office. The ladies flock to you like they’re bumblebees and you’re dipped in honey.”

“I can’t help that I’m ruggedly handsome and charming as hell.”

“And a womanizer,” he said.

“There’s a difference?” I asked quizzically. I wasn’t the lady killer Chance liked to pretend I was. At least, not to the extent he believed, anyway. In high school, I’d been a player. Hell, I’d been more than a player. But those habits didn’t last long after graduation. Though women were still my favorite pastime, and today’s modern dating apps made it really easy to connect with them. Well, “connect” was a loose term. “Hook up” was more accurate. The girls I met online were always a great time until I got them home and they found out how much money I had. Then the jig was up, and everything became a lot less fun because they wanted to trap me, pin me down, and marry my ass.

I did that once. Never again. It hurt enough the first time.

Chance chuckled and shook his head at me. “Her name is Dalia. She’s twenty-six. Everything is firm, man. Everything. My job just got a hell of a lot more fun.”

I wrinkled my nose. “Poor girl.”

“My poor cock, more like. And balls. I’ve been walking around all day with a stiff one because of that girl.”

I shook my head. “Please, stop. I didn’t need to know that.”

“Don’t be a pussy. You can’t tell me you’ve never had blue balls at work.”

He frowned. “Who’s bothering you?”

Chance laughed. “Sure, I’ll get right on that. Anyway, I should introduce you to her. Maybe you can work that suave tongue of yours and be my wingman.”

I shook my head. “We’re at work, man. Not a nightclub. Reel it in, Chance. Seriously. Let her do her job without being harassed.”

He shrugged. “I haven’t said anything to her.”

“She’d had to be dumb as a post to miss the creepy vibes you’re putting out there.”

I ran my hand down my face and shook my head. “For her sake, I hope she gets promoted real quickly.”

“Technically I’m her boss, so that is up to me.”

“You’re an asshole,” I said. “I look forward to testifying at your trial. Against you, I might add.”

My cell phone rang, sparing me from this horrifying conversation. I fished it out of my pocket and glanced down at the screen. I didn’t recognize the number.

As I answered the call, I held up one finger to Chance, asking for a moment. He nodded, clasped his hands over his stomach, and waited. I put the call on speaker. “This is Dallas Jansen at Treo Publishing. How can I help you?”

“Band?” Chance practically squealed in front of me. He’d leaned forward, and his knuckles were turning white as he gripped the armrests of his chair. His wide, delighted eyes stared at me in awe. I supposed he didn’t take me for the band type, especially not with my lady killer reputation.

“Mr. Johnson,” I said, leaning over the speaker. It was weird to call an old teacher anything but what you used to call them as a student. Mr. Johnson had asked me time after time to call him Arthur after I graduated, but it felt wrong to me.

“Dallas, I’m glad I was able to get through to you. I wasn’t sure if you still had the same number after making it as a big shot at Treo.”

I chuckled. “Big shot? That’s a bit of an exaggeration.”

“Still as humble as ever. Listen. I’m retiring this year.”

Mr. Johnson laughed in that same deep way he used to. I could picture him, gray moustache quivering above his lip as he threw his head back and laughed. “Indeed it is. I’m having a party tomorrow night. I was hoping you’d be able to come. I do understand if you can’t make it. This is late notice, after all.”

A retirement party? That sounded like Doom’s Day to me. All the people I used to know and hadn’t seen in ages would be there. People who hated my guts.

“Uh, yeah, I think I can make it,” I said. I didn’t want to come across like I didn’t care. Mr. Johnson had been a very positive influence on my teenage years.

“Excellent,” he said. “I’ll send you over the details. I’ve only reached out to my favorite students, so it’s not that big of a soiree. See you tomorrow?”

“See you tomorrow.” I nodded, and then we hung up the phone.

Chance was still staring at me with wide eyes and a mischievous smile. “Band?” he asked again, even more incredulous than the first time.

I sighed and slumped back in my chair. “Yes. Now get the hell out of here. I have work to do.”

Chance stood up, shaking his head and chuckling to himself. He made his way to the door, pulled it open, and paused to look back at me. “Let me guess. You played the flute?”

I pointed at the door. “Go work on your inevitable lawsuit and leave me alone.”

Chance rubbed his hands together. “You don’t need to tell me twice.”

I shook my head as he closed the door behind him and left me in peace to resume my last bit of work for the day.

But work was elusive. My mind was flooded with thoughts about this retirement party tomorrow night, preventing me from getting into the manuscript I was trying to read for my client.

Mr. Johnson had said that he was only inviting his favorite students. That meant there wouldn’t be many of us in attendance most likely. No more than twenty or thirty.

It also meant she would be there.

The girl who still wandered into my thoughts to this day, despite not having seen her for more than half a decade. The girl who had my heart wrapped around her pinky finger and didn’t even know it.

The girl who realized she was too good for me and walked out of my life without looking back.

After everything that had happened between high school and now, I knew one thing for certain: I was not prepared to see her again. Especially not within the next twenty-four hours.