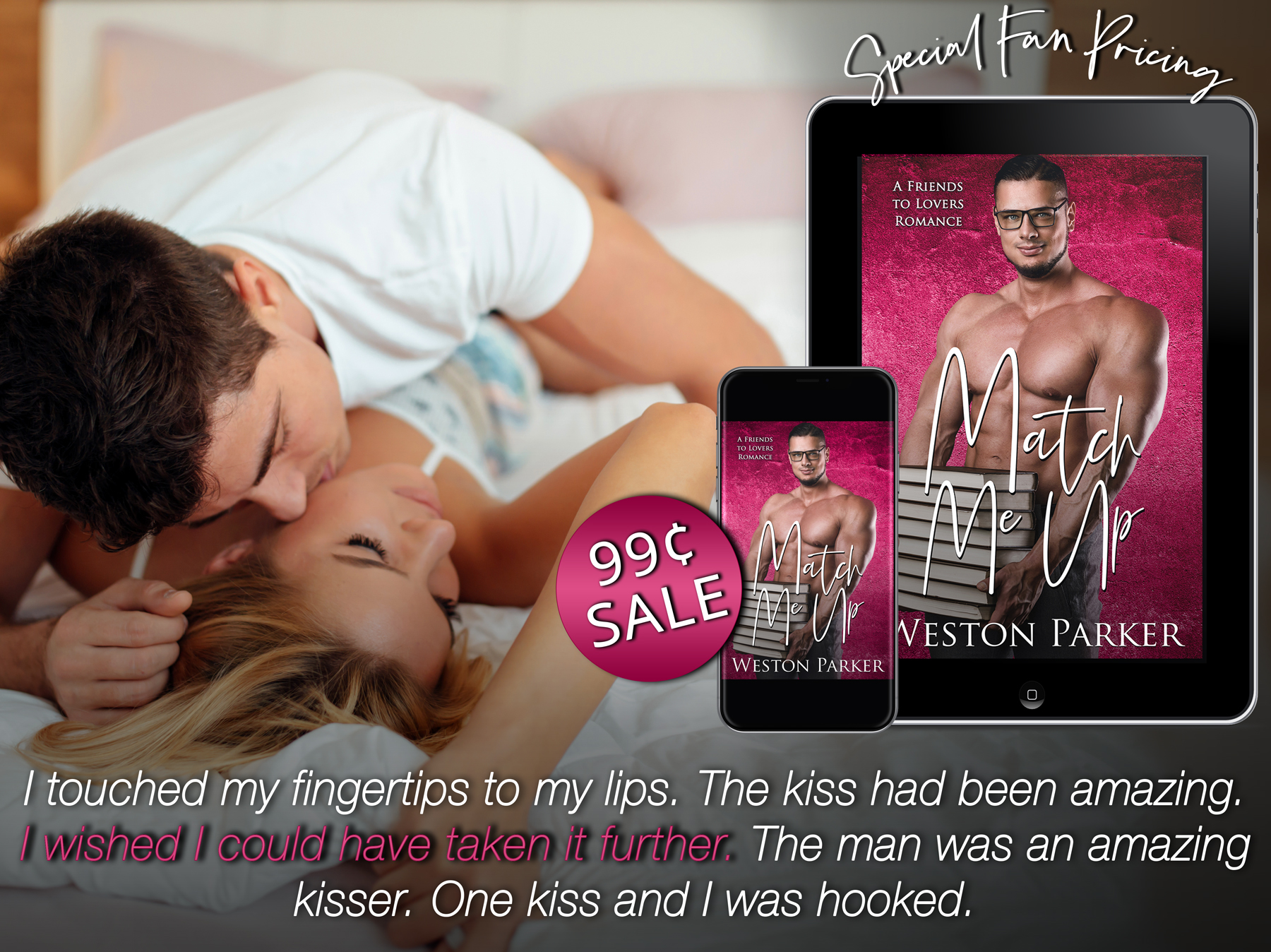 “Don’t skip, don’t skip,” I recited as I basically skipped to the mailboxes in the building. I smiled at Mrs. Peters with her usual scarf tied around her head to protect the curlers I was convinced were a permanent part of her head. I had never actually seen her without curlers. I wasn’t even sure she actually had hair.

“Good afternoon, dear,” she said with a toothy smile. Her dentures were just a little too big for her face.

“Hi, Mrs. Peters,” I said while praying she wouldn’t pull me into a long conversation.

“You look lovely today,” she said with an even bigger smile. She patted the little white dog tucked under her arm. That was yet another permanent fixture.

“Thank you,” I said and had to doublecheck to see what I was wearing. It was as I suspected. Old cutoff shorts, a T-shirt that was just a little too big, and my blonde hair was piled on my head in an actual messy bun. Not a cute, stylish, messy bun.

“Are you enjoying your summer?” she asked sweetly.

I couldn’t be rude to her. She was making conversation, and usually, I spent a good fifteen minutes talking to her. “I am. I’m bummed it’s over so soon. How about you? Did you get that AC fixed?”

“I did. Thank you for helping me get the landlord in gear,” she said with a shake of her head. “I just don’t understand how he could be so cruel to an old woman.”

“I’m sorry you had to go without for so long,” I said. “You know where I live. If you have any other issues, you come find me, and I will get on him.”

“Thank you, sweetie,” she said.

“I’ve got to run,” I told her. “My friend is upstairs waiting for me.”

I gave her another quick smile before I rushed past her with my mailbox key in my hand, ready to slide into the lock. I was trying to keep my expectations in check, but I couldn’t squelch the hope. I had checked the mail every damn day with the expectation I would get the letter I was so impatiently waiting for. My future rested in that letter.

I jerked open the little door and lost my breath. A manila envelope curved inside the small box. There was only one thing it could be. I squealed and jerked it out of the box before slamming the door closed and locking it again. I jogged up all three flights of stairs back to my apartment.

“It’s here!” I exclaimed as I walked into my apartment. I struggled to catch my breath as I waved the envelope around. “It’s here. It came!”

“Well?” Tamlyn, my best friend in the world, asked. “What does it say?”

“I don’t know!” I practically shouted. I was so nervous I felt like I was going to vomit. I knew the letter was coming. I had been anticipating it coming, and now that it was actually in my hand, I couldn’t open it. “The admissions counselor said I was next up on the waitlist. What if they changed their mind? What if someone ahead of me changed their mind and decided to take the acceptance?”

“Open it and find out,” she said with a laugh. “That’s generally how I read my mail.” She came to stand in front of me.

I held the envelope in my hand. It was very, very thin. An acceptance would include paperwork. I was guessing this envelope held a single paper, maybe two. My college acceptance packet had been much thicker. I could actually see my future going up in smoke. I didn’t have a backup plan. Panic was threatening to take over.

“You’ve been waiting for this envelope for months,” she said and pushed it against me. “Open it!”

“Girl, you know you’re going to get in,” she said. “You’re freaking out for nothing. You have an amazing GPA. Your essay was amazing. You interviewed well. You’ve got this.”

I worried my lower lip. “I don’t know. There were a lot of people applying for this program. I was told the competition was intense. I’m sure there are people that went to great schools applying for the program. I went to a school that no one has heard of. Being waitlisted was a kick to my ego.”

“And you are one of the best applicants,” she said. “Open it. It doesn’t matter what school you went to. You are just as qualified. Probably more qualified, Miss Smarty-pants.”

Her compliments were kind, but they were not sinking in. “If I didn’t get in, that’s it,” I said. “I have put everything on this one letter.”

“Okay, I’m not going to go negative with you, but if you didn’t get in, you apply at another school,” she said.

I pouted and felt my excitement deflate. “I don’t want to go to another grad school. I want this school.”

“You’re not going to know if you get to go to that school if you don’t open the damn letter,” she scolded. “Stop being annoying and open it.”

“No, but I don’t know. I just can’t handle bad news,” I said and walked away from her.

My palms were sweaty, and I felt weird. I had been looking forward to getting this letter, and now that it was here, I was panicking. For the last four years, I had a plan. I worked my ass off to keep on track. Grad school was the next step. I knew it was a lot. I knew I was young, but I didn’t want to stop when I had momentum. I wanted to keep going until I reached my goals. I wanted my master’s by the time I was twenty-five at the absolute latest.

“Yes. Just don’t tell me if I didn’t get accepted.”

Her soft laughter from behind me made me want to laugh and cry at the same time. I was making myself crazy. I knew I sounded certifiable. Obviously, she had to tell me what was in the damn envelope. What was I going to do come September? Show up on campus without being accepted, or not go to class when I had been accepted?

I spun around and covered my face with my hands. I didn’t want to see her reaction when she read the letter. I could hear the paper from the envelope being torn open. I could barely breathe. I didn’t dare look at her. I knew her too well. I would be able to see right through her. If she tried to hide her reaction, I would pick up on it.

Everything stopped at that moment. I stood staring at her. “I’m in?” I gasped. “For real?”

“I can’t believe it!” I screamed and joined her in jumping up and down. “I’m going to grad school! This is the last step on my climb to the top. I’m going to do it. I’m going to make it.”

“I didn’t,” I said and snatched the paper. I needed to read it for myself. My eyes scanned the paper. It was definitely an acceptance. My heart started to pound in my chest. I wanted this more than anything and to physically hold the confirmation of my dreams coming true was overwhelming.

“I didn’t move to Austin because I wasn’t absolutely certain I would get in. Now, I’m going to be scrambling to find a place. I procrastinated. I bet all the cheap places are already taken. I’m going to be stuck with what’s left. Dammit!”

“Relax,” Tamlyn said and put her hands on my shoulders. “You only live an hour from the campus. You could drive there. You’ll have classes what, two, three days a week? That’s not terrible. The commute will get you used to being an adult. That’s what life’s all about.”

“Commuting?” I said with a laugh. “I think people go out of their way to avoid commuting.”

“If you work in the city, but you want the house and yard with a picket fence, you have to live in the suburbs. The farther from the city, the bigger your sprawl. You’re going to be wealthy, and you’ll be able to afford a big fancy house. Commuting is going to be a part of your life.”

I shook my head at her idea. “It might be in the future, but right now, I can’t afford to commute. I’ve got to be closer so I can get to class on time. I need to be able to participate in any extracurricular projects as well. Driving not only costs gas money but time.”

“Are you planning to work still?” she asked as if that sounded crazy.

“I have to,” I said. “I like food. I like running water and, of course, all that fancy electricity.”

“I have to pinch pennies,” I told her. “I’m so close to the finish line. I can eat ramen and live frugally a little longer. Walking to campus saves money. I’ve got to try and find somewhere to live in a hurry. I should have looked earlier. I was beginning to think I wasn’t going to get in.”

I groaned and flopped onto the ugly sofa that was older than the dinosaurs. Finding a new place meant another security deposit and application fees. That was going to put a serious dent in my finances. I should have planned better. I was a planner, and I dropped the ball.

“Hey,” Tamlyn said and came around the couch. She moved my legs and sat down. “I thought you had a full-ride scholarship?”

“I busted my butt, and I did get a scholarship for the actual school but nothing for living expenses,” I said. “I get a small subsidy, but it’s up to me to pay for the rest. I appreciate the scholarship. It makes this all possible, but I don’t want to live in my car.”

“Living in Austin is going to cost a lot more than it does here,” she said. “You can’t live in a dump. It isn’t safe.”

“I need to start looking,” I said. “Like yesterday.”

“You know,” she said and got a sneaky smile on her face, “I think I have an idea.”

That was never a good phrase. Tamlyn was my other half. She was the wild one; I was the nerd. How we ever became friends was still a mystery. She was beautiful, athletic, and everything I was not. She was long and lanky while I was decidedly not.

I had done every diet in the world. I had tried running, but that just didn’t make sense to my body. I embraced the curves. Worrying about them and trying to fit into a size two was just not conducive to happiness. I wanted to be happy, which meant I had to accept and embrace the body God saw fit to give me.

“I don’t think I want to know,” I said. “If it has anything to do with selling my body, it isn’t going to work. Maybe we can sell your body.”

She threw her head back, her long, sandy brown hair falling over her shoulders. “Good plan, but we’ll save that as a last resort. You know I would do it for you, though. I’ll take one for the team.”