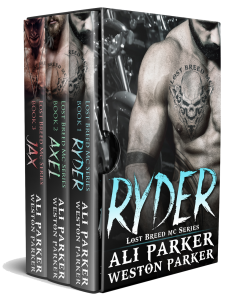 I’m not a good man. Not worthy of redemption.
As President of the Lost Breed MC, I fight, f**k and take what’s mine.
But everything changed in the blink of an eye, and now I got a kid, my brother’s kid. The teenage bastard is just like me.
And he’s gone missing.
My only hope is that the hot piece of ass that’s been assigned as my nephew’s parole officer is willing to help out a criminal like me.
She’s got something to prove to the world after losing her sister, and I plan on taking full advantage of her willingness.
She’s innocent, good hearted and sexy as f**k. The kind of girl I like to break in the bedroom.
I’m driven mad with the desire to gain her affection, to be the one that wakes her up in the dead of night to take advantage of her softness and remind her who’s King.
Why? Because she’s not buying my shit.
And I love it.

They wanted to attack my house. My family. My MC.
And for that, I brought hell to their doorstep.
An eye for an eye.
Little did I know that the favor would be returned in full.
Everything I hold dear is threatened, including the beautiful girl who holds my heart and doesn’t know it yet.
Shit gets serious when the cops show up with a little one that’s supposedly mine?
My MC has always been the only family I’ve ever had, but times are changing.
There’s nothing I won’t do to protect what’s mine from The Black Hearts.
Even kill – every last one of them.

Seven men were killed last night.
Their bodies were sliced and diced by a psycho with a machete, and no matter what angle I look at it from, I know it’s only a matter of time before I have to get my hands dirty.
Real dirty.
Things gets even more complicated when Holly Whitton, the girl who captured my heart a decade ago, moves back to New York City. She has secrets, that much is clear, but I can’t help but be drawn to her warmth. She’s a haven from the chaos that lingers at my doorstep, and she’s my responsibility to protect.
But my life with my MC is a threat to her—and so is the man with the machete and the hunger for blood. Maybe I’m the one I need to protect her from.
Maybe I’m the reason it will all fall apart.
Or maybe I’m the only one who can hold it all together.