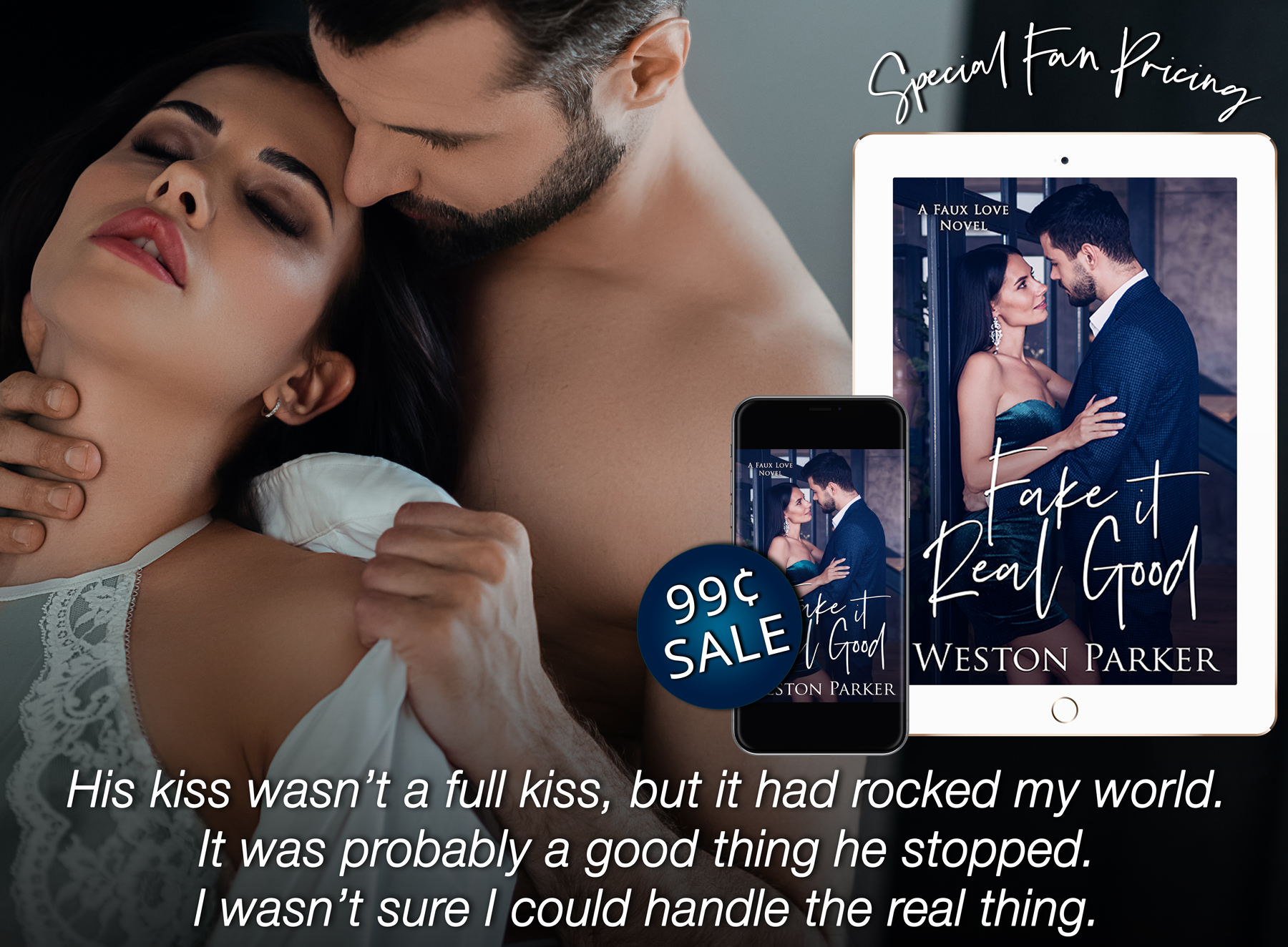 I always felt like Batman. Finn was my Alfred. He was older, English, and extremely proper. And he was the best damn executive assistant a guy could have. “They’ve been served the usual?” I asked without looking up from the screen.

“Sir,” he said with all of the regal offensiveness of a man that considered himself to be the best of the best in the world of assistants.

I grinned and looked up at the man with graying hair at the temples. “Sorry, Finn. Thank you. I’ll be over there in two minutes.”

“Very good, sir,” he said, spun on his heel like he was being dismissed from a military drill, and walked out of my office.

I quickly reviewed the information, nodded to lock it in tight, and collected my things. I was the COO of one of the top real estate agencies in the world. I got to where I was by being able to recall facts, figures, and statistics without fumbling through files or staring at a screen when I was supposed to be staring at a client. My clients loved me because I was always prepared. There was little I didn’t know about the world of real estate. New York City was my stomping grounds. There wasn’t an alley I didn’t know about. That was the kind of information our clients valued. They could trust us. They could trust me.

I stood and buttoned the jacket of my custom Italian suit. I adjusted the tie, snapped the sleeves, and was almost at the door when Finn returned with his lint brush. We both knew there wasn’t a speck of lint on my black jacket and pants, but I rarely made it out the door of my office without him brushing over me with the damn thing. I learned a long time ago not to fight it. It was like a child getting his face cleaned by a doting mom—to fight was futile.

“Very good, sir,” he said and vanished into thin air once again.

The conference room was on the opposite side of the forty-second floor of the building my firm owned. Our real estate firm occupied four floors, with me and my immediate team sitting at the top. I nodded at the agents and brokers I passed on my way to the conference room. My Guccis slid over the thick carpet.

I stepped into the conference room and quickly sized up the three men sitting at the table. It took about two seconds to identify the leader. He might not have the title of manager or leader, but the way he carried himself gave it away. I knew the look because I had the same look.

“Hello, gentlemen,” I said to get their attention.

They all stood. I shook the hand of the man I identified as the one with the power. I introduced myself. “I’m Aton Holland.”

They all introduced themselves before we all sat down. I poured myself a glass of water from the carafe and started the pitch. “I understand you’re here from LA?” I said.

“We are,” the leader who identified himself as David said. “Our company is looking to expand to the east coast.”

“And you’re looking to buy or lease office space?” I asked.

I knew the answer, but I needed them to tell me. I was handling this meeting because these people were big money. They were bringing millions of dollars to the table with more to spend if we did it right.

“We need headquarters, a warehouse, and potentially more office space if things go well,” David answered. “We have some specific needs, including parking. The building must have parking.”

“Are you looking for short term or long term?” I asked.

I leaned forward and looked him directly in the eyes. “I’m sure I don’t have to tell you the benefits of buying versus leasing. New York is a hot market. Buying will save you a small fortune. If for some reason, you don’t want to stay in the Big Apple, you come back to me and I’ll sell the building for a profit.”

One of the underlings scoffed. “You can’t guarantee you’ll make us a profit.”

I smirked. “I can. Some brokers can’t, but I can. I can because I’ll find you a building for a hell of a deal. I will negotiate until you get the best possible deal. You’ll already be above water when you move in.”

My phone rang in my pocket. I didn’t shut it off when I went into these meetings. I needed my potential clients to know I was in demand. It increased the sense of urgency. They wanted what everyone else wanted. Technically, I didn’t need games to make me appear to be anything more than I was. I was in demand because I was damn good at what I did.

I ignored the phone, but one of the men at the table appeared bothered by it. “Are you going to answer that?” he asked.

Just for show, I pulled the phone out of my pocket to check it. I expected it to be a client. Instead, I saw my brother’s name. I set the phone to vibrate and put it on the table.

“Do you need to take a minute?” David asked.

“Nope. I’m here right now with the three of you. Let’s talk about space. How many offices will you need?”

“We didn’t say we were buying,” one of them said.

I flashed my best smile. The one that had made me richer than even I thought possible. I looked to David. “I’ve put together a portfolio with some of the buildings for sale. I’ve also included spaces available for lease along with the cost analysis with both options outlined. Like I said, you’ll find the cost savings for buying versus renting are significant.”

One of the men opened the portfolio and started to flip through the listings. “Aren’t these offices in this building?” he asked.

I smiled again. “They are. We offer some of the premier office space in the city.”

“They are very expensive,” he said with disgust.

“You’ll notice those offices were only recently vacated and are the only empty spaces in this entire building,” I said. I played on the sense of urgency angle. “We offer security, prestige, and a variety of restaurants and coffee shops right in the building. When a client or an investor pays you a visit, they will be impressed. That’s what we offer.”

“I’d like to arrange a tour of some of these properties,” David said.

My phone rang again. This time I hit the silent button without looking at the screen. I had them on the hook. I was going in for the kill. “Anytime you’re ready, we can arrange those tours. I have to tell you; the market is hot. These properties won’t last long.”

“They all say that,” one of the guys muttered.

“I’m not sure who they are, but I have a building here in the city. I have everything I need to be successful. While I’d love to help you get into a comfortable building to grow your business, it doesn’t really make a difference to me if you do or you don’t. It’s your choice. I don’t have to play games. The fact is you are not the only company looking to expand into the city. Think what you want, but the properties in that folder are not going to last long.”

“I’ll have my assistant arrange the appointments,” David said. “I have another meeting to get to, but we’ll be in touch.”

I stood and shook each of their hands. “I look forward to doing business with you,” I said. “I’ll keep an eye on the market in case these are snapped up before we can get a deal worked out.”

“We’d like to see some commercial properties in New Jersey as well,” David said.

David led the way out of the conference room. I knew a lot of people viewed real estate agents in the same vein as used car salesmen. I didn’t care. People needed homes and businesses. I had climbed the ladder to get to the position of COO because of how well I did my job. I could match people with a property they didn’t even know they wanted until I presented it to them.

I followed, positioning myself beside him as we headed toward the elevators. “I can get you some listings,” I said. “Would you like me to send them to you today?”

“Yes, please,” he said. “We’re not set on Manhattan. We’re flexible within reason.”

He wanted to play hardball. I’d let him have that. Part of making a sale was making sure the client felt like they were in control. They needed to feel like they weren’t being pushed into anything. This was especially true with powerful men. I could stroke a guy’s ego if it was going to earn me a few million in fees. The elevator doors slid open. I reached out to hold it and found myself looking at my brother.

He never came to my work. Ever. I looked at him and subtly jerked my head to the side to silently tell him to step to the side. “Gentlemen, I look forward to hearing from you,” I said. “I’m sure you have plenty of options and you’re going to meet other agents. Just know this; I’m the best. This firm is the best. Others can pretend, but only I can deliver.”

I pulled my hand from the door and let the doors close. I waited a few seconds before turning to my brother. He had a cocky grin on his face. “I forgot how smooth you could be,” he said with a small laugh. His blue eyes twinkled. My little brother stood about two inches shorter than my own six-two stature. People could usually immediately identify us as brothers with our similar build and the same strong facial features with the black hair our mother passed down to us. The blue eyes were from our father.

“What are you doing here?” I asked and ignored his snappy comment.

“We need to talk,” he said in a way that said it was important.

That was never good. “Now?”

I checked the time. “We can get lunch,” I said. “Have a seat and give me five minutes to clear my schedule.”

He took a seat while I headed back to my office. Finn caught me. “Sir—”

“Finn, I need to take off for about two hours,” I told him.

He was always formal and would never dare argue with me unless it was about something he thought he had a right to stick his nose in, but he pursed his lips. “I’ll need to adjust your schedule,” he said in his usual calm voice.

“Has something come up?” he asked.

“He’s here and he needs to talk to me,” I said and grabbed my wallet and sunglasses.

“I see,” he said, and before I could get to the door, I was attacked with the lint brush once again.

I held out my arms and let him do his thing. “I’ll be back in a bit,” I said and walked away with one last swipe of the brush down the center of my back. If I ever wondered what it was like to be doted on by a parent, I no longer needed to be curious. Finn had somehow filled that role in my life at the ripe age of twenty-eight. Six years ago, he became my assistant. It felt like thirty.