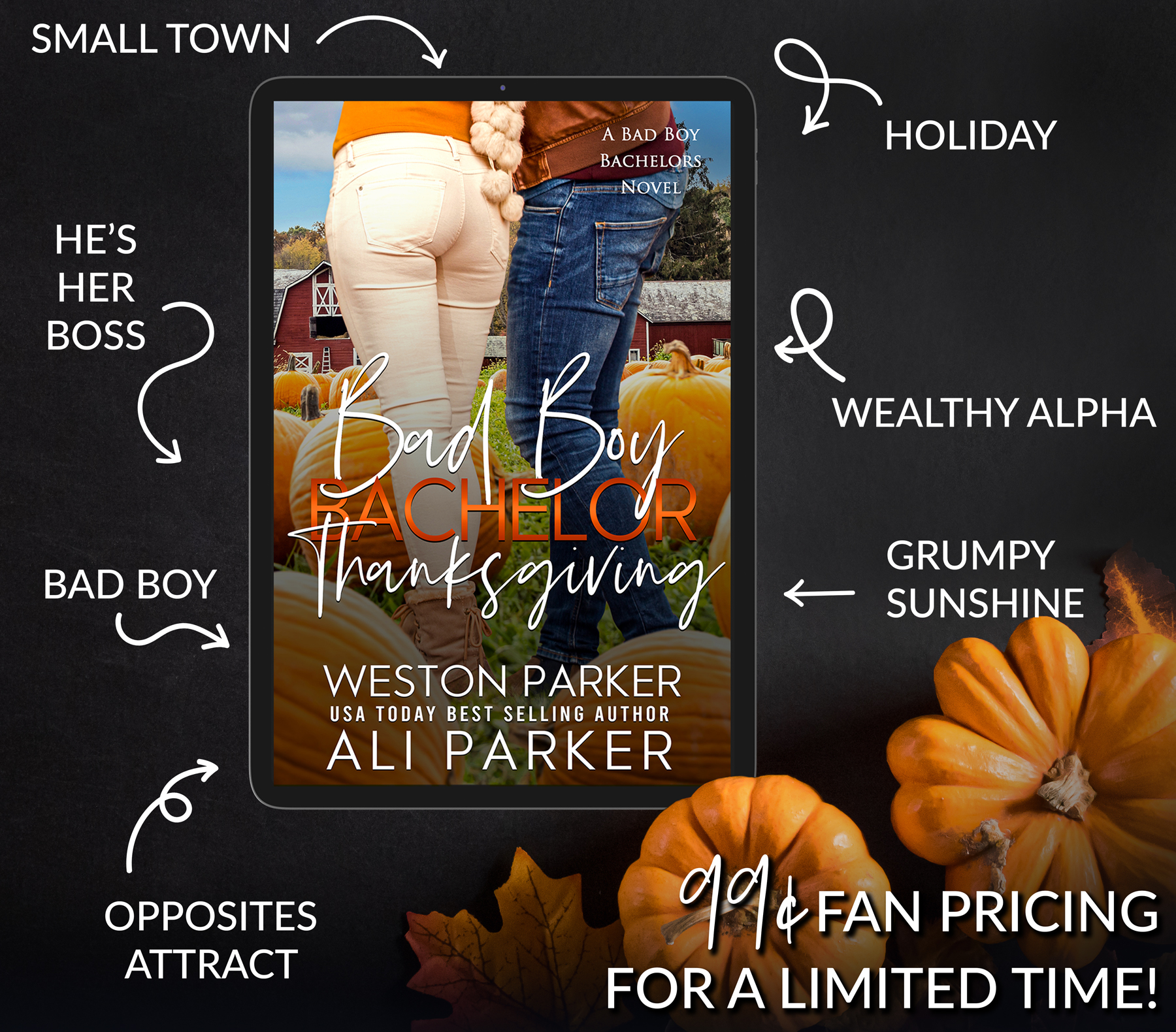 99¢ FAN PRICING FOR A LIMITED TIME

A girl with short, auburn hair in a miniskirt looked over her shoulder at me as she waited in line for her coffee. She had legs for days—the sort of legs that made a man wonder if they ever ended at all—and long dark lashes that a younger, much more naïve version of myself might have believed were real. She batted them slowly at me.

I looked down at my watch.

Why is it so fucking hard to find punctual staff these days?

I had too much on my plate. Long legs and pretty eyes would have to wait until December. Everyone else always found the Christmas season chaotic, but for me, it was a reprieve from the busiest season of my career. As the Executive Director of the New York Thanksgiving Day Parade, most of October and November were write-offs for me, and I was incredibly dependent on my employees to pull their weight and do what they were told.

Which was why on this crisp, sunny October morning, I found myself irritated.

My assistant should have been here twenty-five minutes ago. No text. No phone call. No explanation as to why she was running late.

Long Legs shot me one last imploring look as she strutted past my table by the window. Her perfume engulfed my senses seconds after she walked by, and I stared longingly after her as she moved down the sidewalk, her faux-fur cropped jacket pulled tight under her chin. Miniskirts were a bold move at this time of year in New York.

Subconsciously, I began tapping my heel on the café floor.

Where the hell is she?

With the parade less than six weeks away, I didn’t have the time to retrain another assistant in order to replace the shitty one I had. Fuck. It might have been easier to just fire her and do it myself. Sure, it would mean a hell of a lot of late nights in the office, plenty of insomnia, and probably a huge decline in job satisfaction, but the hustle would be temporary.

I could manage it.

The café bell chimed above the door.

Carla, my assistant, hurried in with loose papers sticking out of the binder in her arms. She was the definition of disarrayed. Her hair, uncombed and mousy, stuck out every which way, and her glasses had slid halfway down her nose, presumably from her running from the subway four blocks away.

Carla collapsed into the vacant chair across from me, then deposited all her books and papers on the table, nearly knocking over my coffee, and pushed her glasses up the bridge of her nose with an apologetic glance in my direction. “I’m sorry, Mr. Corral. I didn’t mean to be late. I overslept and the subway was so busy.” Her gaze wandered to the menu boards and her thoughts scattered as she considered what to order. My temper pulsed. “I had to wait for three trains. What did you order? Are their white mochas any good here?”

“I don’t drink that shit. Order what you want and get back here. We’ve lost half an hour already and we need to review—” I paused, looking down at her mess of paperwork. I sighed. “We have to review whatever that is.”

“It’s what you asked for.” She perked up proudly, flipped open the binders, and revealed printed photos of dozens of floats that were participating in the Thanksgiving Day Parade. Attached to the images were pages and pages of typed notes. Some of them were graffitied with Carla’s slanted, tidy printing. If only she was as organized as her writing. “These are all the confirmed floats in the parade so far.”

I felt one of my eyebrows arch toward my hairline. “So far?”

“I’m still getting in touch with the others.” She pushed out of her chair and fished her wallet out of her jacket pocket.

I slid her my Amex.

“Thanks, boss,” she chimed before hurrying over to the line to order her coffee. If you could even call a white mocha a coffee.

I flipped through the pages she’d provided. There were eleven.

Last year, we’d managed to arrange twenty-eight impressive floats, and this year I wanted to up the ante by adding at least five more. However, adding new businesses and participants meant adding a bigger margin for error. Working with new people created a higher risk factor, and an assistant like Carla didn’t help matters.

I needed this information days ago, and she didn’t even have fifty percent of it.

What does the girl do with her time?

I eyed her as she ordered her mocha and hemmed and hawed over what food she wanted. The barista made some suggestions, all of which Carla seemed unenthused by until she eventually settled on a pumpkin scone. She returned to the table a few minutes later with her goodies in hand.

We were officially forty minutes behind schedule.

“How much contact have you had this week with the other float owners?” I asked.

Carla sipped her white mocha. Whipped cream clung to her upper lip. “Um, we haven’t touched base since the beginning of last week.”

“Because you’ve had me running around like a chicken with my head cut off,” she said flatly. “I’m doing my best, but I think you might need two assistants, Mr. Corral.”

“Or,” I said, fighting the urge to lose my cool, “I just need one assistant who is capable enough to handle the workload of her position, and who understands the importance of frequent communication with parade participants this close to the event. Do you know how easy it is for people to withdraw their float when they feel like they’re being hung out to dry? We lost three floats last year in the final two-week stretch. I don’t want to scramble to fill holes this year, especially not because someone on my end is dropping the ball. Do you understand?”

Carla took a bite of her scone and blinked her big, doe eyes at me. “I said I was going to get in touch with them soon.”

I got to my feet. “Listen, Carla. You’ve given this a good run. But after four months, I expect you to be able to prioritize your time better than this. You need to make a decision. Either step up and take your career seriously, or hand in your resignation letter. I’ve been paying you a generous salary so you can twiddle your thumbs and I’m not interested in waiting on you for forty minutes because you were ‘surprised’ that the subway in New York City was busy on a Friday morning. Take some accountability, or I’m going to replace you.” I grabbed my jacket from the back of my chair and shrugged into it. “Oh, and consider this the last coffee on me until you start treating this like a job you care about.”

Carla blinked slowly at me before looking down at the papers in front of her. “Aren’t you going to take these with you? I spent a long time on them.”

“And you wasted a lot of ink. What am I supposed to do with loose papers like this, Carla? I’ve told you countless times that I only want digital copies. Besides, this is half-assed work. Send me a link to a finished file when you’re done, if you choose to stay at the company. I want it by the end of the day.”

“You want every float confirmation and status image by the end of the day?” she asked incredulously.

“Yes. You have eight hours. It’s more than enough time.”

Her mouth worked, but no words came out. “I don’t think—”

A few blocks from the coffee shop and eighty stories above street level, I sank into my office chair and exhaled slowly. I already had a pressure headache and the day wasn’t even half over. Carla was supposed to make my job easier, but somehow, she managed to pile on stress with every passing week and create more messes for me to fix.

I should have fired her three months ago.

Good help was hard to find these days. People see the flashy salary I’m willing to pay and the luxurious office and hear the word “parade” and immediately assume the gig is easy. They have no idea the demands that will be put on them to make that salary worth it. I’d gone through six assistants in the last two years, no one better than the other, and had to let them all go after too many mistakes and not enough personal investment in the work.

It wasn’t like I was a merciless overlord, either. Sure, around Thanksgiving I could get a bit tense but the other ten months out of the year were much more relaxed. I needed someone who would hustle, test their limits, and thrive under pressure. Someone who didn’t take criticism personally. Someone who’d been built tough and wasn’t looking for a boss to hold their hand and constantly offer them recognition when they were mediocre at best.

I was beginning to doubt that person existed.

The Mayor’s office lit up the caller ID. I scooped the phone up. “Hello, Mayor Hopkins. This is Treyton.”

“Treyton Corral! Just the man I wanted to talk to this morning. How are things, son? Moving along? I’ve been getting calls left, right, and center about the parade. There’s a real buzz about it this year. Are you feeling the heat?”

I chuckled. “I feel the heat every year, sir.”

“How are things looking?”

“The bare bones are coming together. We still have a month and a half to go, but I’m confident we’ll be off to the races soon.” I forced a smile into my voice. Mayor Hopkins was an easy man to appease, but he had an annoying way of wasting my time.

Sometimes I wondered if he was lonely. Rumor had it, he called plenty of wealthy men in the city to make small talk during business hours. Sometimes he’d fish for invitations to lavish parties and talk about how he needed to meet a woman. His wife had left him six years ago for a younger, more attractive man. Single male voters who’d been wronged by their ex-partners turned up in droves to vote for him. Personally, I’d never been able to find much common ground with the guy.

“I have complete and total faith in you, son. I’m excited to see what you and your team pull off. I bet it’ll be the best parade yet. And you’ll have me on the most impressive float, won’t you?”

“Of course, sir. Right at the front.”

“Thatta boy. Listen, you got time for a beer later this week?”

“Sorry, sir, my free time is pretty much nonexistent leading up to the parade. But thank you for the invitation.”

“Wouldn’t dream of it, sir. Have a good one.” I hung up even as Mayor Hopkins’s voice continued to fill the line. If I didn’t, he’d find a hundred different ways to say goodbye, and I’d waste another several minutes of a day already half wasted.

My computer chimed. The telltale notification sound of an email coming through.

I opened my inbox. At the top was a new email from Carla. It could be one of two things: her resignation or the digital file I’d requested.

There’s no way she got all that done so quickly.

Her email consisted of four words.

Fuck you. I quit.

I leaned back in my chair and chuckled. Something was finally going right today.