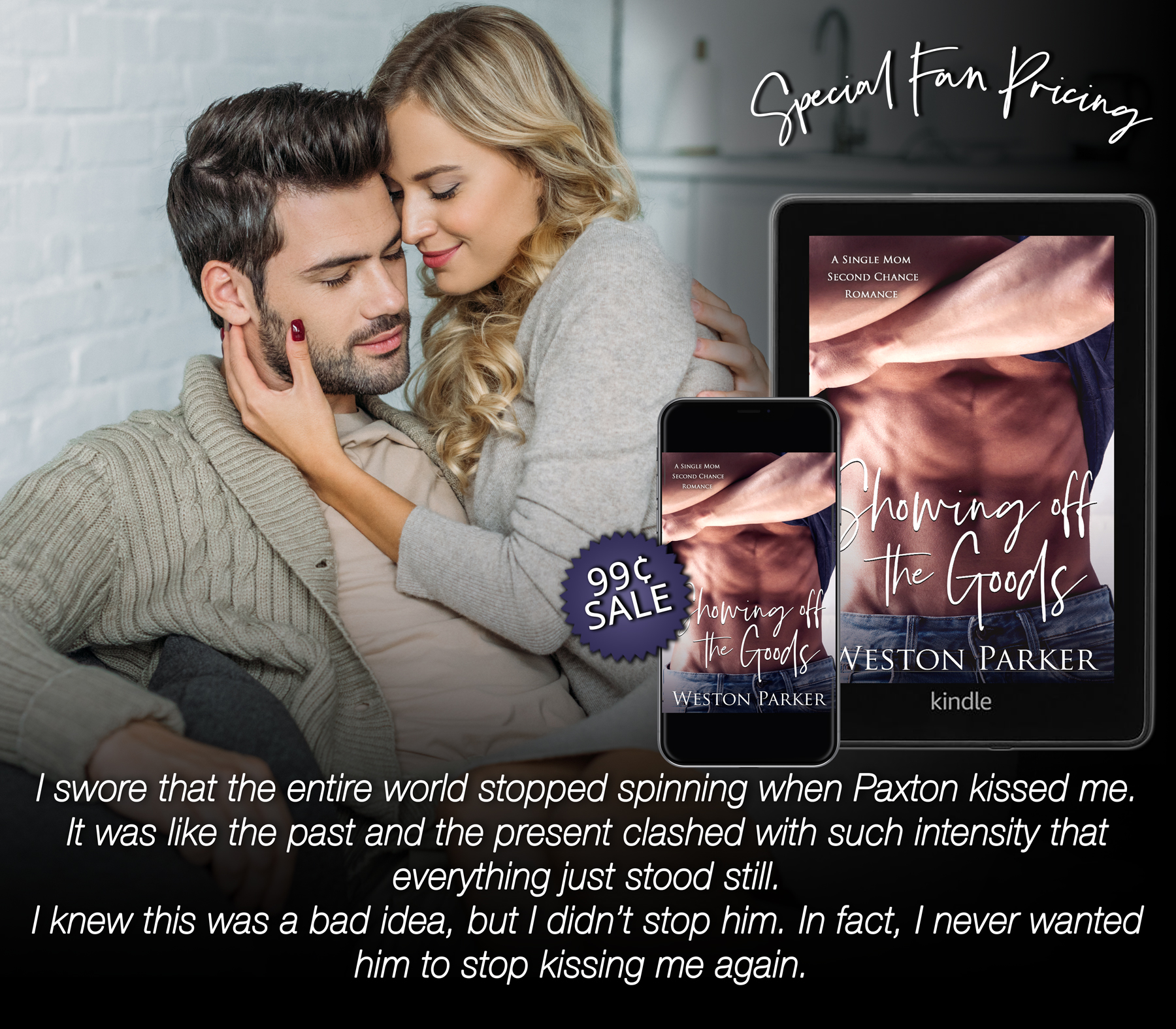 “When are you going to tell me to make love to the camera, Josh?” I called to the photographer, smirking as I curled my fingers into a claw and pretended to take a swipe at the air. “Come on, I’ve always wanted to do that.”

“You’re shit out of luck today, Pax. Sorry,” he retorted, taking a step back from the camera to check out his last set of pictures. As he flipped through them, he peered up at me and narrowed his eyes while he thought. “Could you move over to the bar? Sit down behind the counter right in front of the window. I want to see what I can do with that light.”

“Seriously?” I motioned from my chest to my abs and then flexed my arms. “You’ve got all this to work with and you want to see what you can do with the light?”

“For having been in the military for half a decade, you really don’t take orders very well,” Adam, the director, said. “Just do what Josh says, will you?”

“Yes, sir,” I said, but he’d been trying to get me reeled in the whole day. I liked being defiant, though.

Josh glanced at one of the female models that had been booked to do this shoot with me. She was new on the scene, but she had an ass like a nice, juicy watermelon and a slight curve to her hips that I found myself attracted to.

Since I was only wearing a pair of briefs, my attraction would be making itself known pretty damn soon if I didn’t get behind that bar. While I didn’t mind people ogling me, I didn’t particularly want them to see the effect it was having on me to imagine seeing my handprint on that ass.

So I pretended to be a good little boy, and I moved to where he’d told me to go. As she walked over to join me, I gave her my most charming smile. “Out of all of the shoots in all of the world, you walk into mine. I think that’s fate, don’t you?”

“Pax? Help her onto the counter for me?” Josh called. “Irene, I want you to lie down on your back, face the camera, and loop your arm around Paxton’s neck once he’s behind you.”

Gallantly holding out my hand to comply with this instruction without argument, I didn’t miss the way her eyes raked across my naked torso even as she bit out her response. “Out of all of the lines in all of the world, you choose that one to flirt with me?”

Her palm landed against mine, and I held on while she climbed onto the counter. “Oh, I get it. You don’t like lines. Well, then allow me to start over. My name is Paxton Gould. I’m so very pleased to make your acquaintance.”

“You catch on fast,” she commented, fighting a smile as she lay down and motioned me closer to get her arm around my neck. Her lips were close enough to my ear in this position that I heard her loud and clear even though she kept her voice at a murmur. “Tell me, Paxton Gould. Are you busy later?”

Ding ding ding. “I think I just made plans.”

“Nah.” She grinned before turning her face toward the camera. “I was just asking if you were busy, because I am. Better luck next time, stud.”

My laughter came out of me like a shot, and it boomed around the converted warehouse that was becoming the latest bar in town. “I like you, Irene. It’s nice to work with someone who isn’t all serious for a change. We’re going to be friends.”

“We’ll see about that.” She got it out just before Josh snapped at us to stop smiling, and the camera started clicking away.

Between him and Adam, they ordered us into more and more compromising positions, and then they added a few more girls to the picture. Not that I was complaining about being drenched in models, but for the life of me, I couldn’t figure out what having us here in our underwear had to do with marketing a bar.

“Hey, Josh?” I said after a while. “Could you come here real quick?”

He frowned at me over the top of the camera before nodding and coming over. I got up slowly, peeling hands and arms off me as I slid off the stool I’d been on. Once my feet hit the concrete floor, I gestured at it. “Just have a seat for me there for a minute.”

I glanced at Irene and sent her a wink. “Ladies, if you could please get back into your positions?”

While poor Josh sat there, probably getting hard while the girls did as I asked, I walked over to the camera. “Right, everybody. Give me big smiles. Now, Josh, would you mind explaining to me why we’re trying to promote a bar by prancing around in our underwear?”

Adam waited for about a minute, trying to fight a grin of his own while Josh stammered out an answer before he called cut. “We’re taking a five-minute break. Paxton. My office, please.”

I sighed, but it had been so worth it. Josh’s face was flushed, but he was smiling from ear to ear while he talked to the girls. I was just helping him out. We’d worked together a lot before, and he’d mentioned once that he needed to get out more. Maybe he’ll even have better luck with Irene than I did.

Catching up to Adam as we reached the office in the corner he was temporarily using as his, I followed him in and shut the door behind us. The director and I got along well, and he perched on the edge of his desk with his hands braced at his sides as he brought his gaze to mine.

“I like working with you, Pax,” he said, head tilting slowly to the side as he kept watching me. “I don’t even mind that you like to keep things light and fun. It sure as fuck beats the alternative, but I’ve spent a lot of money to have all these people here. We only get one shot at this. If our campaign isn’t good enough, they’ve already got three other companies lined up to take over.”

“Reading you loud and clear. I’ll rein it in, and I’ll be on my best behavior.” As much as I liked being defiant, I’d also gained the ability in the military to cut it out when push came to shove.

Adam didn’t want to waste money or lose his one chance at this, and I didn’t want to be the reason why he did. If he’d brought me in here, it was because he was getting worried we wouldn’t get what we needed in the time we had.

While I wouldn’t apologize for my actions, I could take it down a notch for the rest of the day. “Don’t worry, Adam. We’ll get it done without any problems. I was serious about my question to Josh, though. Why exactly are the girls in lingerie and me down to my underwear?”

Laughter rolled out of me again, and I clapped him on the shoulder as he passed me on his way back to the door. “I hope they know that’ll cost them extra.”

“I hate apples,” I replied, grimacing as I followed him back out to the main area. “Have I got time to grab some water before we start shooting again? I need to wash the taste of that thought out of my mouth.”

Chuckling as he agreed, he pointed at the camera. “Take a few minutes. Josh and I will get some solo shots of the girls. I’m hoping it’ll go faster without you around to distract them anyway.”

I shrugged. “What can I say? It’s not my fault I’m so funny that I’m distracting.”

When he walked away from me, shaking his head and muttering under his breath, I headed over to where I’d left my backpack. After grabbing my phone to check it while I got a drink, I twisted the lid off a glass water bottle and drained half of it in one go.

As if my sister had sensed that I had all of about two minutes to myself, my phone rang and Tierra’s name came up on my screen. She was three years younger than me, but she definitely acted like a big sister.

I smiled as I swiped my thumb over the green bubble to take her call, though. She was forever reminding me to stay on top of things that I needed to get done, and honestly, she reminded me a little of our mother before she had passed. It was virtually impossible for me to ignore a call from her.

“Hey.” I brought my hand to my heart and clutched it. “You can’t see me right now, but that hurt.”

She laughed. “No, it didn’t. You’re a former military guy who became a male model. Plenty of people stroke your ego on a daily basis by telling you how you’re the hottest hero around. I refuse to join those ranks. How are you?”

“Good. You?” My chest constricted at the thought that there was something wrong and that was why she was calling, but she sounded okay.

It was a throwback thing to having received one too many calls bearing bad news in my life. Tierra might act like the older sibling, but I was still technically the big brother.

I had the protective thing down, and she was all I had left. Which only amplified that need to protect her by about a million. Not that she’d given me many opportunities to actually do it.

She’d been dating the same guy since high school. Brett had fucked around a lot when we’d been younger, and then Tierra had jumped onto his radar. After that, he became a grizzly bear about her.

I’d hardly gotten the chance to threaten a few dates before he swept her off her feet and took over the role as her main protector. Dick.

He had been a friend of mine. I still loved the guy, but he really could’ve waited for me to wave a shotgun in a few faces before he swept in on his white donkey.

“We’re good,” she said, and I could hear the smile in her voice. “In fact, we’re so good that you want to meet up for dinner with me tomorrow night. I have some things I need to tell you.”

“If you took that investment opportunity for portable toilets in households, it’s not my fault, and I can’t get any of your money back.”

“I’m an investment banker, remember? I don’t need your help with those kinds of decisions.”

She paused for a moment. “Are you still on your steak, egg, and fries kick? We can do Leonard’s at eight?”

“Paxton!” Adam waved to catch my attention. “We need you.”

I nodded my acknowledgment and lifted a finger to show him I’d be there in a minute. “I’ll be there, sis. I’ve got to go, but I’ll see you tomorrow night.”

She said goodbye, hanging up and letting me get back to the shoot. As I headed toward Adam and Josh, I smirked and pretended to pull the waistband of the briefs away from my hips. “Okay, I’m ready to get naked. Let’s see how sexy we can make this thing, huh?”

They both groaned, but when I shot Adam a look to let him know I was joking, he nodded and waved me ahead. I wouldn’t cause any holdups or run the risk of costing him money, but we could still have a little bit of fun. And that’s where I come in.