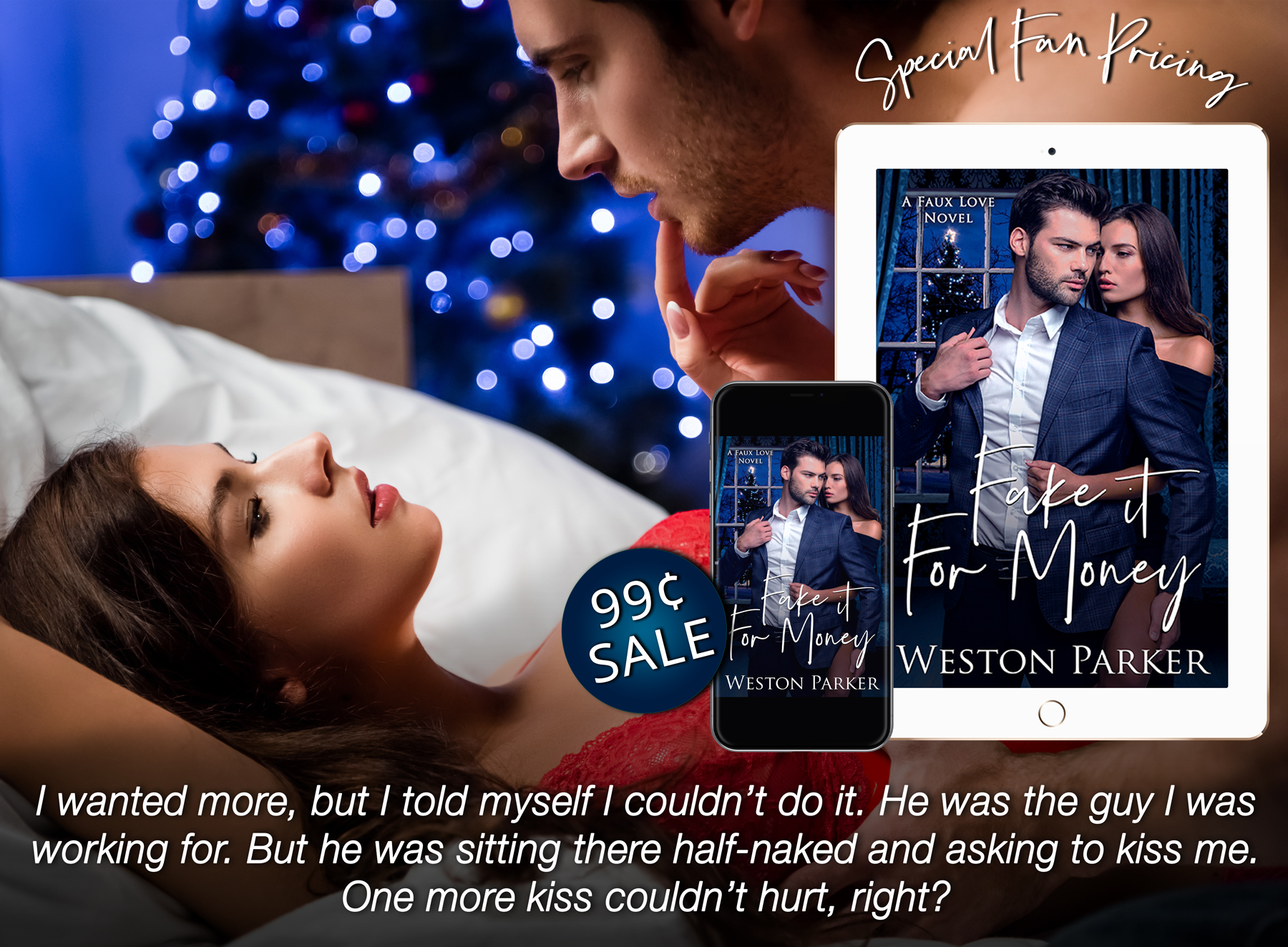 I put the phone back in the cradle and let out a long, exhausted sigh. It had been a hell of a day. How was talking on the phone so physically draining? It was back-to-back conference calls. This time of year always pushed me to the edge of sanity. I needed a drink. Unfortunately, I still had more to do and needed to have all my faculties about me.

My office door swung open. Nicholas, my assistant stood just inside. Behind him, Christmas lights twinkled against the shiny garland that hung on the walls. “You’re finished with the calls?” he asked.

“Yes. Please tell me that was the last one.”

I lazily gestured to the sofa in my office. I decided I was going to have that drink. I walked to the small bar set up in my very large, opulent office. I poured myself a small amount of scotch and took a seat on the buttery leather chair that faced the couch. Nicholas had his face buried in the large iPad he carried everywhere he went. It even had a strap and handle on the case to keep him from dropping it. The thing was an extension of his hand. I rarely saw him without it.

“Did you hear back from Aspen?” I asked.

“Yes.” He nodded without looking up. “The tree was delivered and is in the process of being decorated.”

“How in the hell is there a delay in Aspen? Isn’t that where Christmas trees come from?”

He finally looked up at me. His hazel eyes and brown curly hair that bordered just on the edge of shaggy gave him a very boyish look. “We selected only the best trees for the lobbies,” he explained. “You instructed the decorators to go big and grand. The tree for the Aspen resort came from somewhere in Oregon.”

“Yes.” He nodded. “It stands at twenty-two feet tall and is about twelve feet around.”

“I have some pictures of the Chicago lobby,” he said. “It was even trending on Twitter for a couple of hours earlier today.”

He detached the tablet from his hand and passed it to me. An image of the lobby of Barlow Chicago was on the screen. “Damn,” I said. “That is pretty amazing.”

I slid my finger across the screen and looked at the images of my lobby. Some were pictures taken off social media and others were from the staff that worked at the resort.

“Have you been to visit the New York location?” he asked.

“I’ve been to Barlow New York City, and it is good. It is going to be a romantic destination. Marketing has been putting together some ads to run on social media. The decorator really outdid herself. The fireplace has a fluffy white fur rug in front of it. The couches have been decked out with the faux fur pillows and soft throws. It seriously looks like something out of a Hallmark movie.”

“You know, one of those Hallmark Christmas movies that the ladies love,” he said as if it was obvious.

“I don’t know what you’re talking about, but I’ll take your word for it,” I said.

Nicholas was all about the ladies. Unfortunately, he wasn’t quite the Casanova he thought he was. He tried, but most of the time he fell short. “There’s green garland hanging from the mantle with a few stockings. Flameless candles are arranged on the tables. You have to check it out.”

“I’m heading over there soon,” I said.

“We need to go over the final details for the holiday parties,” Nicholas said and fell right back into work mode.

“Did you get the guest list finalized?” I asked. “I need to make sure I get the Stackhouse Group on board. They are going to be the major investors. Without them and their investment, it’s going to be a hell of a lot harder to get that property in Saint-Tropez. I need that property if this chain is going worldwide.”

“Yes, sir.” He nodded. “They have not RSVPed, but I will reach out again.”

“I worked out that deal with Tiffany’s like you wanted,” he said. “We’ve got some great packages for the ladies.”

“And the men? I think golf certificates and maybe some cigars would work.”

He had his electronic pen and was scribbling while I talked. “I’ll check and see what we can get.”

“We were able to secure the diamond suite in all three hotels,” he said.

I knew Nicholas would have me taken care of. The guy was very good at his job. Most people took one look at him and thought he was a cocky kid that got the job as my executive assistant through nepotism. He wasn’t related to me in any way. I hired him years ago and I couldn’t imagine working with anyone else. “I leave on Friday?” I clarified. The date had changed a few times with the last-minute meetings I had in New York.

“You’ll be touching down in Aspen early enough to take the tour with the hotel manager. I’ve got the event planner meeting with you at three to go over the specifics for the party. Your dinner is left open, just in case there are any last-minute things that need to be taken care of.”

I relied on Nicholas to handle my schedule and tell me where to go next. He made sure to keep me on task. I rarely arrived late anywhere due to his excellent time management. “Okay, just make sure you update my calendar and set the alarms so I don’t miss something.”

“Already done,” he said. He was still looking at his tablet, but he wasn’t tapping or writing.

“Yes,” he said but hesitated just long enough to tell me it wasn’t it. I waited for him to spit it out.

He squirmed a little. “Yes?”

“Nothing,” he said, and it became abundantly clear it was more than nothing.

“Nicholas, how long have we worked together?”

“In the seven years that we’ve worked together, you’ve had that weird expression on your face exactly four times. Once, when the hotel in Chicago caught fire. Another when the chef walked out of the New York location. Then there was the time you forgot to pick up my tux before a grand opening. Lastly, you had this look when you crashed the car I bought you. So, tell me, has a hotel burned down?”

“I have three tuxes in case of an emergency, so that’s not it. Did you crash the car again?”

“I did that survey you asked about,” he said.

“About the hotel’s reputation.”

I froze, tightening my hand around my glass. “Are you telling me we’ve gotten some bad feedback? Why? We’re rated five stars on just about every travel platform. What the hell could we possibly do better?”

“Not the hotels,” he said. “Reviews are good. Satisfaction is high. The hotel reputations are fine.”

“As you know, in this day and age, it’s important the owner has a good reputation. People love to cancel businesses they think don’t live up to their moral standards. Investors are watching the public perception temperature.”

“Are you suggesting I have a bad reputation?” I asked.

“Dammit, Nicholas, spit it out. I’m tired, hungry, and I want more than a shot of liquor. I want to go home. Tell me.”

“You have a reputation as a consummate bachelor.”

“Some feel your propensity for bachelorhood is an indication you aren’t really serious,” he said.

“Nicholas, that’s about the dumbest thing I’ve ever heard,” I said.

“I know and it isn’t fair,” he said. “I’m just telling you your reputation hasn’t changed since you first started in the hotel business.”

“I’m one of the top hotel chains in the country,” I said. “I’m not some cocky kid playing in the business world.”

“I know,” he said. “I’m only passing along the information. You’re one of the younger hotel owners and that is already working against you. Some of these large investors are looking at the old you. When they Google your name, those images of you in your late teens and early twenties come up.”

I rolled my eyes. “I’m not out at the clubs and jumping into pools naked,” I said with disgust. “Who hasn’t done that shit in their youth? Mine just happened to be in the papers because of my last name. I wasn’t the only one jumping naked into the pool. Those guys didn’t have their reputations ruined.”

“Yes, I agree,” he said. “There’s something else, probably the most damning.”

I groaned and leaned my head back. “I’m afraid to ask. What could possibly be worse?”

“People see you as cutthroat, caring only about getting your next dollar. Again, in this current climate, people are not fond of rich people. You’re walking a fine line. You have this air of being untouchable.”

“Untouchable?” I asked. “I don’t understand.”

“Arrogant. Stuck up. A few comments suggested you couldn’t find a girlfriend because you were too picky and demanding. Public opinion is very slowly shifting. They want someone relatable. They want to spend their money in places they feel are deserving.”

“Oh my god,” I groaned. “I’m not deserving because I’m not married?”

“No, not at all,” he said. “They just want to feel like they have something in common with the guy getting rich off their hard-earned money.”

I shook my head. “I’m not even going to pretend to understand.”

“I reached out to a PR consultant. She’s worked with some A-listers that have fallen into scandal. I paid her a consultation fee. She gave me a few tips to help people see you as a mature adult. If it doesn’t help, she’s willing to come on board and help fix your reputation.”

“I don’t need my reputation fixed,” I said irritably.

“Right now, Henry Barlow is a bachelor with a reputation as being cold and out of touch with his own humanity,” he said.

“How in the hell does that happen? I work my ass off. I don’t have the time or inclination to go in search of a woman.”

“Rumors, Henry. Rumors are all it takes. Unfortunately, there isn’t any evidence to counter those rumors since you’ve never been out with the same girl more than once. Hell, you’re rarely out with a woman period.”

“Stupid,” I scoffed. “Why does it matter? I don’t have time for someone needing my attention all the time. I’m better alone. That’s when I’m at my best.”

“The Christmas parties are an excellent opportunity to show you have settled down,” he said.

“You take a woman, the same woman, to the parties,” he said with a shrug. “It shows you are a solid guy that has a soft side. If anyone asks, you allude to the idea you’ve been seeing the woman for a while and prefer to keep your private life private. That helps erase the rumor while proving you aren’t the guy everyone thinks you are.”

“I’m supposed to find a woman who wants to pretend to love me to prove to my customers and investors that I’m not the asshole they believe I am, even though most of them have never personally met me?” I said with incredulity. “Is that what you’re telling me?”

“In a nutshell, yes,” he said with a nod. “It could go a long way to securing the capital to buy that property you have your eye on. This is the perfect time to do it with the twelve parties. There is going to be a lot of schmoozing and rubbing elbows.”

I put the empty glass on the coffee table. “I’m going home.”