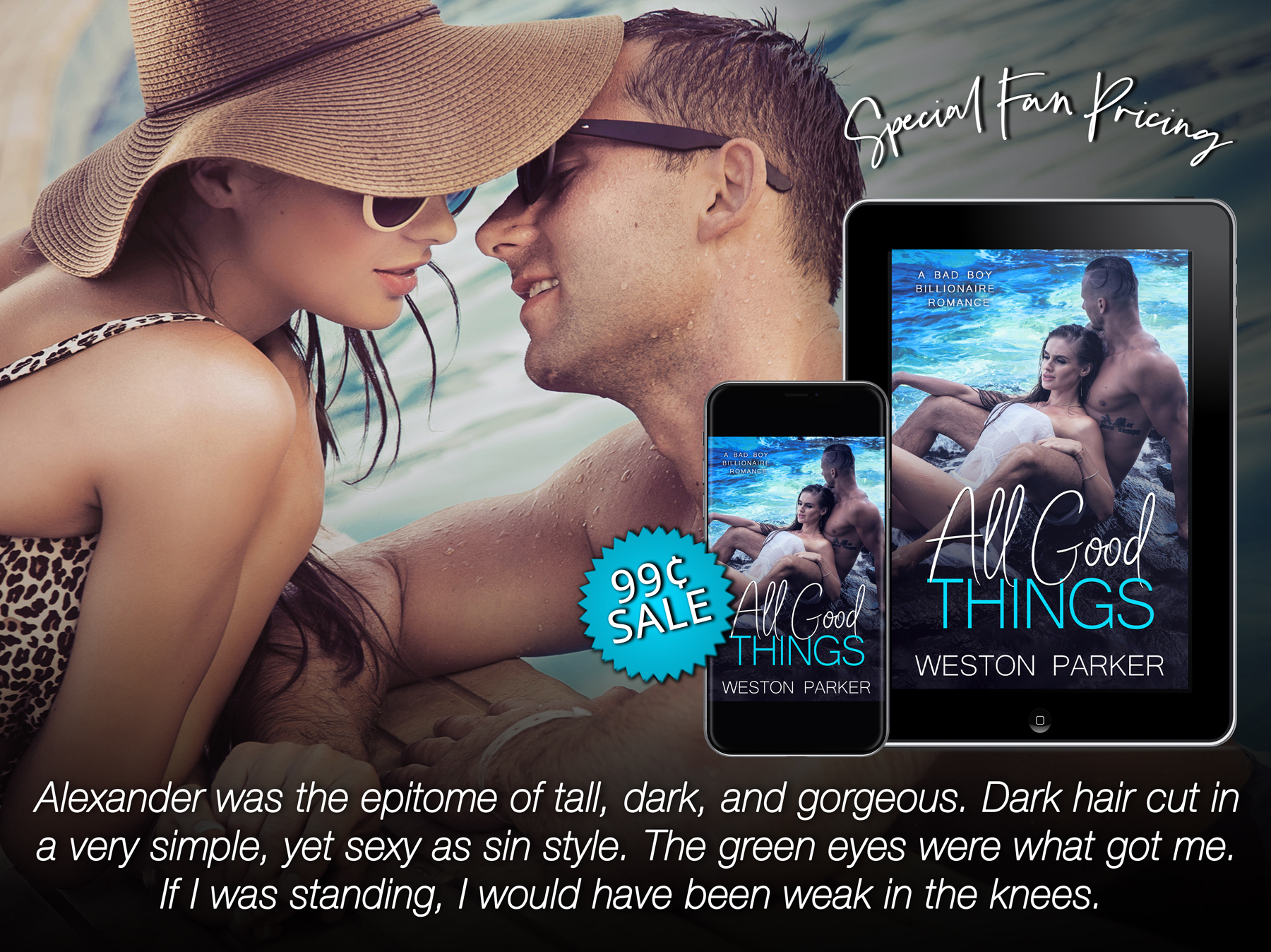 99¢ FAN PRICING UNTIL MIDNIGHT, MAY 19TH

I stared at the screen of the laptop Perrin Thomas slid in front of me. Perrin was my right-hand man. The guy who helped keep me sane when my world was spinning out of control. He was my VP, assistant, and best friend all in one.

“This is bullshit,” I hissed as I read through the scathing review posted by some nobody. “Who is this person?”

She had essentially torn me and my resort to shreds with very little effort. Her writeup about the resort I had spent a year updating and renovating was devastating, untrue, and unfair. I took it from shambles to the best damn resort in Hawaii.

Lush at Lanai was going to be the top destination. I was intent on showing everyone I could make it on my own. I didn’t need my dad. He was going to see I was just as good as he was. Hell, I was better.

Perrin sighed and closed the laptop before pulling it back to him. “Her name is Emily Darling,” he answered.

“What kind of name is that?” I snapped. “Is that even real? She’s hiding behind a fake name?”

“You’re mad about her name?” he questioned. “That’s what has you pissed?”

“She doesn’t know what she’s talking about,” I snapped. “Did you see the same video I just watched? She can’t possibly know anything about my resort. She’s never been here!”

He nodded. “I did see the video,” he replied calmly. That was his way. Always calm. People said he had a dry sense of humor. It was really dry with very little emotion ever being shown. He took deadpan to a new level.

“Emily Escapes,” I sneered as I spoke the name of the YouTube account that was throwing a huge wrench into my plans. “What the hell is that shit?”

“I’ve seen it along with close to half a million other people,” he said. He was stating the obvious. “Her name is cute. She’s cute. People like cute.”

Emily Darling was officially on my radar. I wanted to know every detail of my newest enemy.

“What the hell is a vlogger?” I asked. I was beyond frustrated and pissed. This was my chance to show my father I could make it on my own. I was going to prove to him I had the chops to be successful without his help. I could be just as good as him. Hell, I was going to be better at the resort business than he was.

“A video blog,” he answered dryly. “You know that.”

“Sue her?” Perrin asked with a raised eyebrow.

“Yes, for libel or something. She can’t do this. It was a soft opening. I know every single person that was here, and she wasn’t one of them. I only invited actual travel writers, not this.” I waved my hand at the laptop with my lips curled in disgust. “She’s threatening to ruin everything!”

“I don’t think suing is the right choice,” he said. “She seems to have a flair for the dramatic and suing her would just give her something to talk about.”

I slapped my hand on the shiny conference table that was adjacent to my office. The admin wing was my idea. It meant my staff could be on the grounds and ready to handle any problem that came up at the resort while still getting their normal duties done. I wanted to be hands-on. “She can’t get away with writing that garbage. I only allowed hand-picked travel writers. Look at every other review. They all loved it. They all wrote wonderful things. She’s doing this on purpose. She’s trying to ruin me!”

“Does she know you?” Perrin asked.

I threw up my hands. “How would she know me?”

“Is that a serious question?” he asked sarcastically. “Are you sure you haven’t stood her up or promised to call her after a wild night and never did?”

“I swear, I don’t know an Emily,” I snapped. “She’s lying. She was never here. Get the legal team on the phone. I want to demand she takes down this review. It isn’t true. She’s going to ruin our launch.”

He cleared his throat and reached for the small remote that controlled the big screen on the wall. “Before you get too far down this road, you need to see this.”

He turned on the TV. A security video came up. “What’s this?”

The camera was focused on the front desk. A young woman was attempting to check in. The hand gestures said it all. I could almost hear a shrill voice without any sound on at all.

“Oh shit,” I muttered when I realized it was her. “Is that security?” I asked as a man wearing all black approached her. The look on her face said it all.

“Turn on the sound,” I said as we watched what was apparently a woman creating a scene.

He pushed a button, and the room was suddenly filled with shrieking. Another security guard showed up. He picked up her suitcase as the other one attempted to escort her out of the hotel lobby. “Don’t touch my bag!” she shouted and used the oversize purse she was carrying to slap at him.

“Oh god,” I groaned as I watched the scene unfold.

“I was invited!” she shouted.

The other guests were watching the drama play out. I tried to avert my eyes, but I couldn’t look away. It was like watching a train wreck. I was only glad there were only a handful of people at the resort to witness the drama.

“Why did she show up?” I asked as I watched her practically carried out the door by my security. “How did she even know we were doing a soft opening?”

“She says she was invited,” he said and rewound the video. He zoomed up on the phone she had placed on the desk.

I got to my feet and actually walked up to the screen to get a better view of what was on the phone. Perrin zoomed up just a bit more before the image started to blur. The quality of the video was stunning. I paid a small fortune for the security at the resort. Seeing the images made it all worth it.

“That would be one of the invitations that was sent out to the bloggers and journalists,” he said.

I knew that, but I was hoping he would tell me something else. “Why does she have that?”

“If she had an invitation, why wasn’t she given a room?”

“According to reception, she didn’t have a reservation,” he explained.

I turned to look at him. I could hear the irritation in his voice. It was a tone I had become familiar with in the last few months. “Elliot?” I asked.

He slowly nodded. “That’s my guess. He was in charge of sending out the invitations and reserving the rooms based on RSVPs.”

“Maybe the little Darling didn’t RSVP,” I reasoned. “She threw a fit and blasted me on the internet for nothing. It was probably her own damn fault. I gave Elliot a list of who I wanted invited. I know for damn sure she wasn’t on it.”

“Alex, you know it was him. This is why nepotism doesn’t work.”

I sat back down. “He’s not related to me. He’s the grandson of an old family friend. We share no blood.”

“He was in charge of sending out those invites,” he said again.

I shook my head and rubbed my temples. The kid was driving me crazy. His grandfather thought I could show the kid how to be a successful businessman. I didn’t think the best teacher in the world could teach the kid much of anything. He had been making mistakes since the first day he came to work for me. I couldn’t fire him because of the promise I made, but damn if the kid wasn’t pushing me to my limit.

I pushed away from the table and got up. I jerked open the conference room door. “Elliot!” I shouted.

He popped his head out of the employee lounge. “Yes?”

He gulped and nodded. “Okay.”

I sat back down and waited. When Elliot came into the conference room, he was sweating like a pig. “Yes, sir?”

“Have you seen the review she left for the resort?” I questioned.

He winced and nodded. “I did. It’s going viral.”

I clenched my jaw. “Did you invite her to the soft opening?”

He cleared his throat, and I had my answer. “I might have accidentally done so,” he said in a small voice.

“How do you accidentally invite someone?” I snapped.

“I, uh, well, I was emailing her to tell her how much I liked her channel. She has a blog too and it is so fun. She’s—”

“You sent her an invitation,” I said with a sigh.

I shook my head. “Look, Elliot,” I started and did my very best to remain calm. “You can ogle all the hot redheads you want on your own time, but don’t do it on mine. Do not use the laptop I issued you for work to send messages to your fantasy women. Do it at home on your own computer. You’ve made one hell of a mess with this. A mess I have to fix!”

“Sorry, sir,” he mumbled and rushed out of the conference room.

I sat tapping my fingers on the table for several seconds. Something didn’t feel right. “I know every travel writer,” I said aloud. “I’ve never heard of this one.”

“There are hundreds out there,” Perrin said. “You don’t know them all.”

“But I know more than the average person. Why did this nobody go viral?”

I reached for the laptop and opened it. I quickly did a search for travel news. I sucked in a breath when I saw my father’s image on almost every thumbnail. “I fucking knew it!”

“What?” Perrin asked and pulled the laptop toward him. “What am I looking at? Your dad’s new resort is having a grand reopening. We knew that.”

I shook my head. “Little Emily Darling didn’t go viral on her own. She had help. I have no doubt in my mind Mike Grimes is behind this. That little fucker is a PR machine. He’s purposely sabotaging my resort because it is too much competition for my father!”

“I didn’t realize your dad’s place was doing a reopening the same week we opened,” he said as he scrolled through the articles.

“I can guarantee you that’s intentional. He’s been sitting on this for weeks. He purposely did this to try and kill my opening.”

“You guys have some serious family drama,” he said. “That’s pretty fucked up.”

“You think?” I spat. “I know Mike did this. He’s making sure that stupid review stays in circulation to kill my business and bolster my dad’s.”

“What are you going to do?” he asked.

“You have to do something, Alex. This will ruin us. We’re going to open the doors to crickets.”

“I won’t resort to sabotage,” I said. “That’s his game. That’s a sign of weakness. I know we have something good here.”

“I’ll start with the video,” I said. “I fight back by overwhelming the internet with positive reviews.”

“There are already some great reviews from the real journalists,” he said.

I nodded. “I know, but her stupid video is so much flashier. I have to get it down.”

“I don’t even want to know what you have planned. Just don’t do anything illegal.”

I smiled as I got up. “Never,” I said with a wink and headed for my office.